Kos front pager Dana Houle ("DHInMI"; Kos is going all legit name with their a-list) overlays the maps and notes how much the Hillary 70% map looks like the Kerry Did Better Than Obama map: 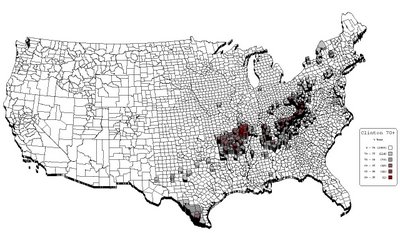 But she sees a silver lining:

The Obama campaign didn't fight hard in many of the Congressional districts colored red. Only in Pennsylvania, Ohio, Missouri and West Virginia do you seem much red in a state contested by Obama. But look at two other states with overwhelmingly white regions that gave Clinton over 70% of the primary vote but where Obama improved on John Kerry's performance. In the Appalachian regions of Virginia and North Carolina, it's clear that the hard work of the Obama campaign paid off.

Speaking of Silver, Nate says it's not a matter of vote percentage, it's a matter of white vote percewntage, and all-white Appalachia does better than the Deep South: