The Homosexual Mafia and the Caveman

The Homosexual Mafia and the Caveman

Iowans, of course, know that Johnson County is The People's Republic, but the coasts don't always differentiate amongst the corn.

Which makes these going-viral comments from the notorious Randy Crawford, quoted by Lynda Waddington in Iowa Independent, all the more embarrassing:


Randy Crawford of Iowa City said he intends to vote for the removal of the justices because he is concerned about the judiciary overstepping its reach and also about the propensity of homosexuals within his community.

“My primary reason for being here is because I believe the Supreme Court should not be legislating from the bench. But I also believe that homosexuality is bad thing,” he said. “It used to be useful when we were cavemen and we needed people to guard the caves full of women and children. If I’m a guy out hunting, I want to leave someone back at the cave tending to my wife and kids, and I don’t want a normal guy having that kind of access to my wife and kids. So, in our evolution, you can see that there use to be a utility for homosexuality, but that was when we were cavemen and we aren’t cavemen anymore. So, homosexuality is obsolete.”

Crawford is a long-term net gadfly with a... special rhetorical style well on display in this epic "comment" on another Waddington post last year:


"By now, most of the world realizes the Iowa Supreme Court has been functioning as a political operations arm of the Iowa homosexual mafia, but their warped ruling to try to legitimize bogus homo marriage came as no surprise to anyone who has been paying attention to their slide toward degeneracy over the years." 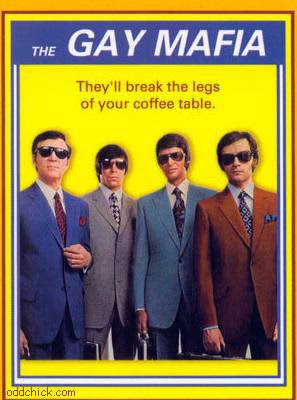 Now, I've been a proud associate of the Iowa City Homosexual Mafia since at least Godmother Kim Painter's first campaign. (Sadly, I can never be a full member because I'm not, shall we say, Italian.) Non-Iowans need to know that while Crawford has an Iowa City address, he's not very Iowa City. We have three out-n-proud local elected officals. We're such a friendly and welcoming community that busloads of same sex couples travel here from St. Louis monthly to get marriage licenses while they can at recorder Painter's office. They could just hop over the border to Keokuk (the little bump on the lower right corner of the map), yet they trek a couple extra hours to come here.

Sadly, not all of Iowa is as friendly. Supervisor Janelle Rettig, who in our mob analogy is probably consigliere, takes Crawfordesque hate more seriously, writing to supporters:


Across Iowa, the homophobic rhetoric is rising in pitch, money is flowing into the state from outside religious institutions and organizations, buses filled with angry people circle the state, and the leaders say homosexuals and gay marriage 'offend god'.

The human element of this debate has been missing for the past few months. It's my story, my spouse's, yours, your son's, your granddaughter's, your neighbor's, your coworker's, the teenager next door, the older never married person living at home, the children, people we have never met.

Human beings are at the heart of all this talk of sinning and hate. Our children are watching us treat each other poorly and some can't handle the pain and rejection. We've had enough discrimination, hate, violence and suicide. Let's find our common humanity and stop spending so much energy hating and bullying.

So non-Iowans, we're not all cavemen. Iowans, we need to keep what we have. Three of our Supreme Court justices who bravely and unanimously ruled that equality under the law means equality in marriage are up for a retention vote. Vote yes to keep them. A decennial constitutional convention question is on the ballot and equality opponents want to use that as a way to end same-sex marriage Vote no to block that. A Democratic governor and legislature will protect equality; support them.

And while you're at it, even though they're unopposed because they do such a damn good job no one is stupid enough to run against them, vote for my friends Kim and Janelle too.
Posted by John at 10/29/2010 07:17:00 PM