Third Parties: Careful What You Wish For

One of my most vivid memories of Election 2000 happened at about 9 AM the morning after the election. Two eager young people came in with big smiles and asked: "How soon can we register Green?" At this point, we didn't know who the hell was president, but they didn't care. The important part to them was a voter card with a G on it.

And not even the best kind of G.

Bleeding Heartland talks at length today about the role third parties may play this fall in Iowa. but there's one aspect she didn't touch on that requires my election office geekiness.

As those two youngsters knew on The Morning After, a group that gets 2% or more of the vote for president (or governor) in Iowa is eligible for full political party status. Ralph Nader inched just barely above 2%, so the Greens had that status for two years, until they lost it when their 2002 governor candidate fell far short. The Reform Party also had full party status from 1996 to 1998.

It's one of the stricter standards in the country. Other states allow the use of lower offices, and voters are least likely to support a third party at the top of the ballot. Other states allow a longer time frame, but in Iowa you have to keep that status EVERY two years.

The law has changed a bit since then, in 2008 Iowa established a second tier of party status called "political organization," which requires a petition and some track record of running candidates. The Greens and Libertarians sued to get this status, and remain the only parties that have qualified.

The main advantage to the Greens and Libertarians, since Iowa ballot access for third parties is not terribly strict,  is that they can get lists of their registrants. Fewer voters have taken advantage of this than I had initially expected. Stats are hard to track because the Secretary of State totals lump them together as "Other," but as of the end of may only 0.35% of Iowans were either Green or Libertarian. That's no doubt gone down since because of the June 7 primary, in which one had to register as a Democrat or a Republican to participate.

And that's the biggest difference between full party status and "organization" status. Democrats and Republicans have primaries, Libertarians and Greens do not.

That 2 percent law for full party status is still in effect. The Greens seem content as an organization, and didn't even run for governor last time. But the Libertarians want the legitimacy of full party status bad, and they came very close in 2014 at 1.8%. They needed just 2,261 more votes.

Their chances seem even better in 2016. Gary Johnson seems likely to draw a lot of Never Trump votes, and a few Bernie Or Bust votes. I've always theorized that Libertarian candidates take about two votes from Republicans for every one they draw from Democrats. Johnson and running mate Bill Weld also have a credible level of governing experience - more than, say, the Republican nominee, and definitely more than Green nominee Jill Stein who seems to be that most typical of third party candidates, a third party activist.

(Speaking of which. Ames Libertarian Eric Cooper is this year making his NINTH consecutive run for state office. Seven of his runs, including this year, have been for state rep; he also ran once for governor and once for state senate.)

Democrats over about 35 are also more gun shy of a third party vote than Republicans. The youngest Bernie supporters were about three in the days of the butterfly ballot and hanging chad, but it's at least within living memory.

One factor working against both Stein and Johnson is Iowa's swing state status. Still, Nader managed to top 2% in Iowa in 2000 even though the state was razor close.

So if Johnson does manage his 2% and the Libertarians become a full status party, people like me will have extra work in the spring of 2018. There will be a Libertarian Party primary, and all the resulting extra ballot styles and printing costs associated with it. Last time we had a third party primary, for the Greens in in 2002, only 439 voters in the whole state took a ballot with a G on it. 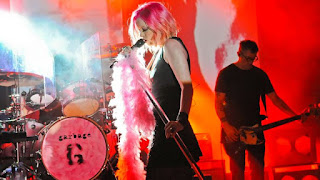 Not this G either. Though the new album shows they've still got it.

That's less than five votes per county. Naturally, many counties had no Green primary votes at all, and most places only had one name on the ballot, the candidate for governor.

Depending on the office, a third party with full party status may also be a VERY easy way to get onto the ballot - the standard for congressional races is based on a percentage of the party's vote. That law tacitly assumes two parties with relative parity... but 1 percent of 2.5% of the vote is a really low bar.

And here's where we get into a cautionary tale for third parties.

A political party is an odd organization. It's private with its own internal rules. Yet it's public in that anyone may join simply by registering. The organization can't really block anyone. I recall hearing something about that in some recent eastern Iowa primaries.

A third party that just barely qualifies for full party status is very vulnerable. It has all the legal trappings and all the public openness, but is not very likely to have the kind of infrastructure the Big Two parties have. A hostile takeover would be very easy.

In fact, it's happened. Remember back to 1999, when Pat Buchanan, an early version of a poor man's Donald Trump, took over the remnants of Ross Perot's discarded toy, the Reform "Party." Now, the Reform Party was pretty much in moribund status in 1999, with no real organization. But they had a claim on some significant federal matching funds, and they had something that the Greens and Libertarians have never had... 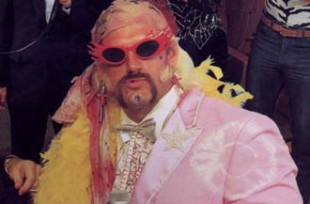 The politics of Governor Jesse Ventura were hard to classify, but he was definitely NOT a Buchanan-Trump style nativist. Since Buchanan had taken over Ventura's party, The Body started his own, called the Minnesota Independence Party. These things are easier to do when you hold significant office.


So let's imagine it's 2017. Gary Johnson had hit his 2 percent. Let's say a substantial group of Iowa Republicans, for whatever reason, want to leave their party and form a new party.

What better vehicle than a party that already has full ballot status yet has only a skeletal organization? Ripe for the picking.

So be careful what you wish for Libertarians. You could finally win the big prize, and then promptly get kicked out of your own house.
Posted by John at 6/27/2016 08:39:00 PM