Fifty years ago today the greatest album of all time was released. 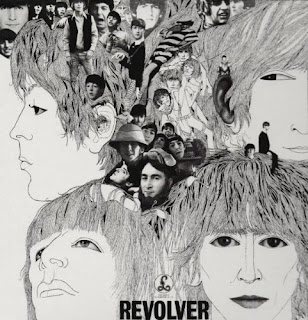 This is a mildly controversial opinion among rock fans and even among Beatles fans. I've been a Beatles fan since I was a little child (see what I did there) but since I was literally weeks old when Beatlemania hit, I came to the party late, outside the original context.

Pre-college I was only skimming the red and blue album surface. Once I started rooming with some slightly older dudes who were deep deep Beatle fans, I learned the sequencing of the original British albums (the now-standard CD format). I'd HEARD Sgt. Pepper thoroughly many times, of course, but it always felt weighed down by its own legend. I still can't listen without being constantly aware that it's supposed to be THE Most Important Record Ever.

And it's very, very good, certainly ONE of the best ever and certainly the one with the most cultural impact. But it hasn't aged flawlessly.

Revolver's American impact was muted a bit as it was the last album carved up by the American record company. They pulled three tracks - all John Lennon songs - off it and slapped them onto the haphazard "Yesterday and Today," infamous for its banned "butcher" cover.

The central concept of Sgt. Pepper is the band as a fictional band performing a variety show. Revolver, on the other hand, is clearly the work of a rock band in the studio from the very opening, a count-off and cue.

George Harrison is more prominent here than on most albums, getting three songs and the opening track. The politics of "Taxman" are more pedestrian than Lennon's later "Revolution" ("count me out/in") but just as complicated and counter-intuitive.

"Eleanor Rigby" is not Paul McCartney's first or last string quartet song, but it takes that framework and moves it beyond the love some of "Yesterday" into a full fledged mini-drama with characters, saying as much in what's left out as in what's left in.

"I'm Only Sleeping," one of the songs excluded in the US version, is a much better invocation of the drugged experience than the one on side two - it really does feel stoned. And it's our first moment of backwards guitar, heard even more on the non-album B side "Rain" (which backed up "Paperback Writer," also not included here).

"Love You To" is Harrison's first full-blown song with Indian instrumentation (sitar solo on "Norwegian Wood" notwithstanding) but is his most effective and the only one that can be imagined in any other style; "Within You Without You" slows down Sgt. Pepper and feels shoehorned in.

"Here There And Everywhere" isn't a great leap forward musically, and could have been fit in as early as Help, but perfect harmony and a touching love song always works.

It's not a REAL Beatle album without one song of Ringo goofiness, and "Yellow Submarine" is one of his finest moments (and one of my very first musical memories). "With A Little Help From My Friends" might be a better SONG, but "Yellow Submarine" seems so simple and innocent that it feels handed down from the ages rather than "written." And the comic studio effects enhance a song with a deliberately limited (by Ringo's voice) melody range.

"She Said She Said" is definitive Lennon, tough yet thoughtful and clever but not too clever. It's also got great guitar work, emphasizing that this is still a ROCK band, which Sgt. Pepper does somewhat less.

"Good Day Sunshine" is a more piano-driven, upbeat version of the McCartney Love Song than "Here There and Everywhere," and such sentiments are both timeless and well expressed by Paul.

"For No One" is almost an antidote to the preceding track, it's an unusually realistic breakup song of a relationship dying of slow decay rather than a dramatic conflict or confrontation. And the horns add a beauty to the regret.

"Doctor Robert" may be the slightest song here, just a little too topical and the only one that feels dated. A song about your dealer was pretty edgy in `66, but a year later with "Waiting For The Man" Lou Reed figured out that a dealer song needed some grit. Still, the rocking track and keyboard bridge hold up nicely.

"I Want To Tell You" is Harrison's THIRD song, one more than he usually got, yet the track is dominated by bass and piano rather than his guitar.. Using the fade-in they originated with "Eight Days A Week," George perfectly captures the awkwardness and ache of trying to figure out how to connect with THE girl, and appropriately leaves the issue unresolved because "I've got time..."

"Got To Get You Into My Life" is a blue eyed soul song authentic enough to prompt several R&B covers and timeless enough to be a hit twice in two years a decade after its release (the original in 1976 to plug the "Rock And Roll Music" compilation and Earth Wind And Fire in `78 from the otherwise atrocious Bee Gees-Peter Frampton Sgt. Pepper movie). The simplest chorus ever - the title - and a half minute of guitar at the end to remind you this is rock.

And then... the revolution.

Decades later, to invoke the world that was overtaking the mad men in the gray flannel suits, they chose this.


There was never anything like "Tomorrow Never Knows" before, and nothing has matched it since (certainly not the White Album's "Revolution 9"). All the cut and paste and found sound and backwards innovations that Sgt. Pepper gets all the credit for are right here in this ONE TRACK.

And it was where the Beatles stayed. Just as they released Revolver, they were completing their final tour. The three years they had left as a functioning band produced some of the greatest music in modern history.