I've been discussing and/or feuding in various online groups that call themselves "progressive." In the ongoing circular firing squad that the Democratic Party always becomes when we are out of power, one of the key bridgeheads up for capture is the word "progressive."

To be honest, I'm not happy that the Iowa Democratic Party created a "Progressive Caucus." The implication is that somehow everyone else is not "progressive," and that there's no other place in the party for "progressives." It's also an impossible term to define - "progressive" is whoever calls themselves that, and everyone is going to define it differently.


In the context of internal Democratic discussion in mid-2017, "Progressive" is de facto defined as "Bernie." So I'm viewed with suspicion because in the end I decided for Hillary, as if I and all of the millions more people who voted for her than voted for Bernie somehow made that decision because we love stock brokers and investment bankers. She called herself "a progressive who gets things done," but that seems to have little resonance any more.
Rather than opting out, I'm hanging in there - trying to listen but correcting misconceptions, and claiming my share of that valuable word progressive.

At the risk of "unity," which the left-left is calling a false value anyway, I'm going to for the first time in a long time explain why I chose Hillary over Bernie.

It may be blasphemy to say so, but politics is about more than positions and platforms. It's about style and skill sets as well as substance.  My problem is not with trying to move the Democrats leftward - I've been in that fight for 25 years. I made my choice for Hillary because I believed she could do the job and he couldn't.

Specifically: Sanders was visibly uncomfortable with any subject other than macroeconomics, especially foreign policy.  He had little to say about foreign policy because he knew that his actual foreign policy, pacifist isolationism, was not going to sell.
Sanders also had no political plan for getting his ideas through a hostile Congress, other than, to paraphrase, the ЯevolutioN will sweep all opposition away in its wake - and even the biggest tidal wave can't overcome bad district maps.

And this wasn't a deciding factor, but it didn't help: the "revolution" rhetoric was nails on a chalkboard to me. Maybe that's because it sounded like me when I was a 25 years old "socialist" in grad school, before I dropped out and made my commitment to electoral politics.

The rhetorical irony of the Sanders campaign is that "progressives" and "socialists" weren't historically allies. "Progressive" is of course a term with century old roots. We had a whole Progressive Era led by Teddy Roosevelt - and the mis-labeled, white supremacist, anti-leftist Woodrow Wilson. Progressives were reformers, not revolutionaries, and in the 1910s, before World War One and the Bolshevik Revolution, progressives were usually against, not with, the Socialists.

And their three Milwaukee mayors.

The New Deal era was also reformist rather than revolutionary, amid real fear that the Great Depression would spark revolution.

Teddy Roosevelt's Bull Moosers were the first of three Progressive Parties. There was also Fighting Bob LaFollette's 1924 party, which was a Wisconsin institution for a couple decades (in that era, progressives were Republicans, not Democrats). 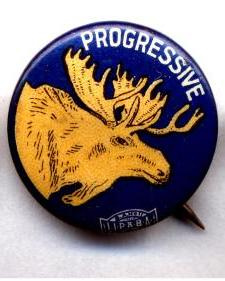 Finally there was Iowa's own Henry Wallace and his short-lived 1948 party. It suffered from hostile takeover by actual Communists,which finally gets my circling around to my point.

For a whole bunch of historic reasons, Marxist class-struggle rhetoric never truly took root in America. It's understood in academic islands, like the one I live in, but it's not part of our political vernacular.

To choose a deliberatively provocative term, the rhetoric of revolution is un-"American." Or since I'm sure to be called a red-baiter for that, non-American. Not anti-American in the McCarthyism sense, but alien to the American political culture, and thus limited in ability to persuade. If you can't persuade, you can't win. I'm not saying that's fair, I'm saying that's a reality. "Revolution" is not going to take back West Virginia.

That's the barrier Bernie Sanders faced as he tried to take over the Democratic Party from outside with a class-based rhetoric explicitly labeled as "socialist." It had a high hipster factor, but the appeal to the actual proletariat was limited. (I attribute Sanders' primary wins in Appalachia less to class struggle and more to I Hate That Bitch. Those four words sum up the whole election - and sadly, certain parts of the left are just as bad as the right.)

Yesterday a bunch of potential 2020ers spoke at the Center for American Progress Ideas Conference, and a few half-noticed tweets from Elizabeth Warren's speech encapsulated why I always found her persona and rhetorical style far more appealing than Sanders.


"It is time for us to do what Teddy Roosevelt did – and pick up the antitrust stick again." #CAPIdeas
— Elizabeth Warren (@SenWarren) May 16, 2017

Notice how Warren's rhetoric has deeper roots in the American tradition. Teddy Roosevelt examples are much more relevant to real word American voters, as opposed to artificially grafting "ЯevolutioN" and "socialism" onto a political culture where those concepts are alien.

When @SenateMajLdr threw me off the Senate floor, it wasn’t my voice that was silenced. It was Coretta Scott King’s. #CSK90
— Elizabeth Warren (@elizabethforma) April 27, 2017

"Nevertheless she persisted" has become such a meme that it's not even always associated with Warren anymore, and the origin story is almost lost: it was when she was reprimanded for reading the Coretta Scott King's letter about Jeff Session on the Senate floor.  The civil rights era in general and MLK and Coretta specifically are authentically and iconically American, at least to half the country, in a way that "revolution" is not. It also acknowledges that African Americans and women, not the white working class, are the true base of the post-1960s Democratic Party.

And while Sanders attempts to invoke the civil rights era, it's invariably just a stepping stone to what he really wants to talk about, macroeconomics.

Warren and Sanders, and to a 95% extent Hillary Clinton, have the same ideas, and we're all (except for my Republican friends) on the same team here. And I absolutely welcome the new people Sanders has brought to activism in general, especially the ones who want to tough it out in the party trenches.

(Pro tip: Activism in a political party is not the best kind of activism for everyone. If you can't in the end come together and back the winner, another kind of activism may be a better fit and I respect that. What I don't respect is having it both ways and waving Jill Stein signs at the Democratic convention.)

But the rhetorical style that thrills some is a turnoff for others. For every X number of 20somethings attracted by "revolution" and "socialism," there are Y voters turned off by the explicit old left rhetorical style. I understand X - because that was 25 year old me. But aren't we all embarrassed by our younger selves? So I'm part of Y.