The 1972 album Some Time In New York City is a fascinating document of the difference between art and politics and of one of the most brilliant artists of all time failing to play to his own strengths. 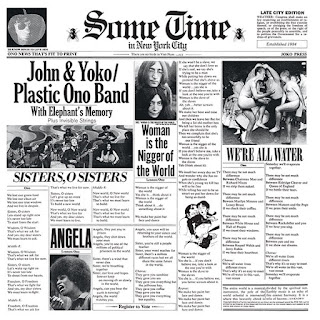 The album's reputation has dropped from its always low standing (being padded to a double with unlistenable live material and thus being pricey didn't help).

The drop is in part because its strongest song, which was actually a low-charting SINGLE and included on Lennon's first hits collection Shaved Fish, is now lyrically taboo. I'm too gun-shy to even type the title; just look at the album cover.

Sirius XM's Beatles channel (my car radio default) occasionally plays "New York City" and "John Sinclair," and also an unbleeped "Working Class Hero" from Plastic Ono Band but I have never heard the album's opening track even MENTIONED let alone played. (However, the network's 80's alternative channel regularly plays "Oliver's Army" by Elvis Costello - that N-bomb is just one use rather than the title and chorus. Plus it's a better song.)


Some Time In New York City is also damaged by its topical same-ness (an issue on some of George Harrison's more Hare Krishna-y albums as well). Lennon had flirted with lefty politics before, but it was always just ONE facet of a John or Beatles project.


The very very misunderstood "Revolution" from the White Album era, with its definitively "count me out" single version and the ambiguous "Out/in" "Revolution 1" version on the album proper, is balanced by "Julia" and "Dear Prudence" and "Yer Blues" and "Warm Gun" and more and a bunch of Paul and George songs (and even a Ringo song!)

On John Lennon Plastic Ono Band, "Working Class Hero" sits alongside "Love" and "Mother."  The title song of Imagine and "I Don't Want To Be A Soldier" share a side with "Jealous Guy." "Power To The People" I don't love, but it's just a single. 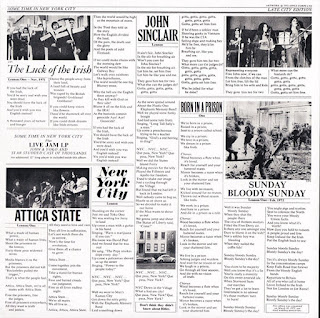 New York City is a whole bunch of these songs, not quite as good as those I just listed. It would have been fascinating to have had an album of first rate Lennon material, or even split Lennon-Ono material, backed by Elephant's Memory. But this one-topic material includes no other part of the complex genius that John Lennon was. I don't want to listen to a whole album of ten "Power To The People"s all in a row.

Yet even that would be an improvement....

Gotta say it: instead of sharing album space primarily with Paul McCartney, John is sharing it with Yoko Ono. Not that Yoko can't be interesting or wasn't influential - just ask the B-52's - but she's not a Paul or a George.

And even Yoko isn't at her best. She's writing in the same cliche sloganeering that John is.

The fundamental problem with New York City, though, isn't the radical politics. "Imagine" is on the very very short list for Greatest Song Ever, and "imagine no possessions" is far more radical that "free John Sinclair."

It's that John Lennon tried to fit his politics into someone else's framework and dogma, and he let that dogma into the songs themselves. Dogma and art mix poorly.

Five years later, the punks had similar left politics but made up their own rules. No one was more a political songwriter than Joe Strummer of the Clash, but he dealt with nuances (see the complex racial and class politics of "White Man In Hammersmith Palais" for a great example).

But on New York City,  for one of the few times in his life, John Lennon was playing by someone else's rules. The rigid left expected Lennon to follow the party line just like they expected Woody Guthrie to sell their newspapers on the street corner. Guthrie refused but Lennon, though only briefly, went along. The result was the weakest work by perhaps the greatest musician of last century.
Posted by John at 12/08/2017 04:20:00 PM