Israel and Palestine: What I Really Think


1) I'm going to take a risk here and say what I really think about Israel and Palestine.

2) What follows would have been unthinkable to say in public in America even 2 months ago. (Israel itself allows more debate.) The discussion has been one sided far too long. It should go without saying that I respect everyone's heritage and faith - but I have to say it anyway.

3) First off I think people should be able to live where they want and migrate as they need.

I'm idealistic enough to be a Statue of Liberty literalist: the core principle of America is that we are a multi-cultural nation and the universal land of refuge.

4) We did not live up to these principles in 1933 or 1945, and we are not living up to them now. But these principles should be fought for, not abandoned, because they are at the core of what makes us American.

5) Aside: Our own hands are not clean. Neither America or Israel was "a land without a people for a people without a land." We can't ignore that our "universal refuge" was founded on African slavery and on the extermination of the Native Americans.

6) But we are what we are now, and while efforts are important, not every human tragedy can be fully atoned for or repaired. Trying to fix one tragedy can create others. Keep that concept in mind.

7) I also believe that nation-states should be secular and not sectarian, & multi-cultural and not ethnic or nationalist based. So I oppose the "right to exist" (sic) of Israel *as currently constituted and organized*. The status quo is immoral, unsustainable, & cannot continue.

8) I am an anti-Zionist because Zionism a) rejects America as land of universal refuge and 2) creates a colonial-immigrant state explicitly based on religion and ethnicity.

9) I believe the creation of Israel in the British Palestine mandate was the greatest foreign policy mistake of the whole postwar era - greater than Vietnam. We addressed one human rights tragedy, the Holocaust, with another -  the displacement of the Palestinians.

10) Rather than backing a specifically Jewish state in 1948, America should have accepted the Jewish refugee population in 1945 - or, better, in 1933.

11) But if there WAS to have been a Jewish state it should have been created in the region where most of the refugees and survivors came from - eastern Europe, where vast populations were already displaced and depopulated in the aftermath of the war. Basically, in East Germany.

12) All that said, "should have" no longer matters. This mistake can't be undone without creating yet another tragedy for four generations that have settled in the Holy Land. No one, be they an Israeli, a Palestinian, or a DREAMer, should be forced from a land they call home.\

13) Finally getting to the point here.

My preference is for a one person one vote secular & multicultural state that treats Jews, Muslims, Christians, and all others as equal citizens.

The problem is, I doubt most of the people who live in the Holy Land actually want that.

14)  It's been clear for many years now that the Netanyahu-Likud plan is to make the entire region between the Mediterranean and the Jordan and Dead Sea an exclusively Jewish state, one settlement at a time, with the Palestinians expected to simply go elsewhere.

15) The Israeli opposition is more open to negotiation, but not on equitable enough terms. (Israel is now in election season.) There are Palestinians who will accept anything they can get, and there are others who want nothing less than a full Jewish exodus.

16) So, sadly, there probably needs to be some sort of two state solution. The tragedy of a two state solution for two peoples so intertwined is that inevitable some people will end up on the "wrong" side of the line. See the India-Pakistan partition for bloody details. 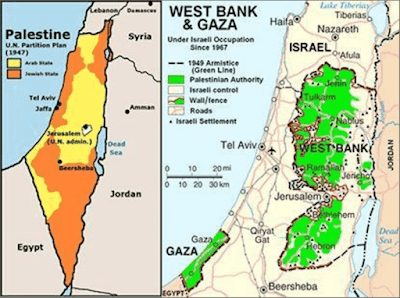 17) If there are to be two states, they need to be more equitable than the 1967 cease fire lines which heavily favor Israel. The basis of discussion should be the original 1947 UN partition plan: 2 states made up of 3 parts meeting at points, with a Jerusalem international zone.

18) Both sides will have to give up a lot: their claims and "rights of return" on the other half, and Jerusalem as a capital. There will need to be compensation to families who lost homes - and in exchange they will need to give up claims on those homes.

19) There will need to be significant disarmament on both sides, including Israel's nuclear weapons. Both sides will have to rein in their extremists, which is easier said than done.
‏
20) Many people will find their homes on the "wrong" side of the line, and their rights and safety must be protected whether they stay or move - again on the principle that people should be able to live where they wish. And any who choose to move should be welcomed in America.

21) Again, all of this is less preferable to a one person one vote equal rights state. And whether there is one state or two, there needs to be a South African style truth and reconciliation process. (Yes I said South Africa on purpose because the apartheid analogy applies.)

22) I an pessimistic and don't see how discussion can get to this point. America might not be the best broker for this discussion. And the hatred in the Middle East may be so great that even this might not work. But it's safe to say *nothing short of this* will work.

23) The point is, in the context of current American politics, we need to be able to HAVE this discussion honestly and without accusations of bigoted motives, and developments of the last few weeks give me hope for that discussion, if not for peace itself. end
Posted by John at 3/10/2019 06:05:00 PM