You can hear in this Sanders speech how much of a role structural change of the party will have in his closing push. Think: open primaries.
— Gabriel Debenedetti (@gdebenedetti) May 18, 2016

Open primaries = if GOP contest is over, Republicans get to choose the Democratic candidate. https://t.co/gFD2joK3ju
— John Deeth (@johndeeth) May 18, 2016

Getting rid of superdelegates would be easier than getting rid of closed primaries. Almost all election law is STATE law.
— John Deeth (@johndeeth) May 18, 2016

The DNC can unilaterally kill superdelegates. They can't get open primaries through 50 state legislatures.
— John Deeth (@johndeeth) May 18, 2016

The problem is that each STATE chooses how to conduct its own primary. And those state laws have to get through whichever legislature and whatever governor they have.

So the DNC can SAY Open Primaries Only, but that has no binding power over Terry Branstad or the Iowa House Republicans. Or, for that matter, over the Iowa Senate Democrats. Just like the parties can set a nomination calendar, but states can break the rules and usually get away with it (which is why we caucused on January 3 in 2008 and 2012). In fact, Florida Democrats used this as an excuse for their against the rules primary date in 2008: We didn't WANT to break the rules, the Republicans made us.

Superdelegates? That's a more realistic reform, because that the DNC can deliver on its own.

And none of these state elections laws, if any, can get changed till AFTER the election.
— John Deeth (@johndeeth) May 18, 2016

So next Hillary unity move should be putting superdelegates on the table, because that they can deliver. Open primaries, no one can promise
— John Deeth (@johndeeth) May 18, 2016

The downside to dumping superdelegates: does NOT open up grass roots seats.
— John Deeth (@johndeeth) May 18, 2016

So the general election starts now, right? Well, not quite.

The Sanders campaign wants to continue the campaign to "the end." Understandable, especially since Hillary Clinton herself campaigned to the last state in 2008, despite daunting delegate math. But we're close enough to the end to start defining the end.

On Tuesday night after his Indiana win, Sanders was talking about "the convention." Now, contesting the convention can mean a couple different things. It can mean a tooth and nail fight, like Republicans were anticipating just a week  ago. Or it can mean the symbolism of the platform and the roll call; people putting their votes on the record, but in the context of knowing and acknowledging in advance who will be the nominee.

The question of superdelegates is in the air, indeed was the most contentious conversation at out own Iowa 2nd CD convention Saturday. It's questioned enough that I think many people believe that Clinton is BEHIND in pledged delegates, and only in the lead because of superdelegates. That's part of a trap that some Sanders supporters have fallen into that I see many campaigns of all ideological stripes fall into: the Everyone I Know Voted For Bernie trap. In fairness, a room of 60something Southern black women might say Everyone I Know Voted For Hillary. This is all exacerbated by a near-direct relationship between age and support; older you are, more likely you're for Hillary, younger you are, more likely you're for Bernie.

In fact, by all counts and estimates, Hillary is ahead of Bernie on the PLEDGED delegate count. AP is reporting 1683-1362. Close but clear.
The superdelegates are another matter - Clinton has an overwhelming 522 to 39 lead. There's a lot of reasons for that, but I'm not going to characterize them because above all I want this post to be about unity. Obviously that's a lot sharper lead than the pledged delegate lead... but Hillary is leading in both. The superdelegates magnify the majority but don't create it.

I don't believe in changing the rules in the middle of the game, but I'm always open to ideas next time. Superdelegates and other nomination reforms are a reasonable subject for discussion. Team Bernie has drawn a line in the sand that Superdelegates Are Bad so at least for unity's sake it needs to be on the table along with the issues of open vs. closed primaries. (That one is harder, because by and large election law is STATE law.) Just because of the time frame, that may be limited to TALKING about talking about it. By its very nature, process stuff usually happens in off years rather than election years.

(The biggest such question affecting Iowans will be whether President Hillary tells the DNC no caucuses, primaries only, which I expect. The Iowa Democratic Party clearly has no Plan B for fighting for an early primary in that scenario, but as I'm not on the caucus review committee, I don't have a seat at that table so I'm just saying so in public.)

Sanders himself yesterday said "until the last vote is cast" which would mean the DC primary June 14. Personally I'd rather see things wrap up after California and New Jersey on June 7, but June 14 is better than the convention roll call. There are offices to open, doors to knock and lit to print, and frankly the H-> is going to have to be on it.

Others on Team Bernie are arguing he should compete until the nomination is mathematically clinched, and here the math gets convoluted.

Numbers can shift by one or two but I'm finding a total of 4766 delegates; 4051 pledged and 715 superdelegates. That makes the total needed for nomination 2383.

Numbers can shift by one or two but I'm finding a total of 4766 delegates; 4051 pledged and 715 superdelegates. That makes the total needed for nomination 2383.

But if you're arguing that she has to get 2383 delegates solely out of the 4051 pledged delegates, without counting the superdelegates, then you're counting superdelegates AGAINST her (by using them to measure the bar of what constitutes a majority) but not FOR her (by letting them "count" in an argumentative sense which of course they actually do in a roll call sense.)

I'm not going to attempt a play by play on yesterday's 2nd CD Democratic convention, or the other three. Those who wanted that were following the Twitter feeds anyway. The ego of Shelley, my new pet turtle, is swelling at her online stardom as our metaphor for slow pace, and my old friends from the Fear The Turtle O'Malley campaign enjoyed it as well.

So instead, just a few big picture takeaways.

Less contentiousness than I expected. I'm Hillary-identified now, despite my neutrality through caucus season. I deliberately spent some time reaching across to Team Bernie, out of the need for unity and out of self-interest, as I was running (unsuccessfuly) for the presidential elector seat. Now that it's over, the mandatory disclaimer. The conventions only choose CANDIDATES for elector. You're not an ELECTOR unless your party's nominee wins the state.

Anyway, out of a few dozen conversations I only got one hostile reaction, and in the atmosphere of a competitive convention, only one isn't bad.

As I was in the Hillary room, I heard conflicting reports about the degree of Bernie Or Bust during the campaigning for Bernie delegates, and I'm not going to judge what I didn't hear. As I've said before, I don't mind letting every state vote, and I don't even mind people casting symbolic votes for their candidate in the roll call. But as soon as the last state votes, we need to get to work. We can't wait till the convention roll call to acknowledge who's going to be nominated and print the H on the doorknocking lit.

Points of contention. I'm not a platform guy and never have been. Sometimes I vote no on final passage just to troll the whole process. But I was trapped and had little choice but to watch. There were two points of heated debate that were proxy wars between the campaigns, and are likely to be end-game goals in Philly for Team Bernie.

They want to kill off superdelegates. I don't think that completely happens in the end, but I think some kind of reform discussion, perhaps a reduction in the number, happens.

The sad thing is, killing superdelegates probably has the opposite of the intended effect. All else being equal, the most likely person to win any election is someone who has won an election before. So if the congressman has to run against the grass roots activist, the congressman is likely to win, and that's one less seat available for a grass roots activist. We saw this on a smaller scale in the vote for Hillary's two female delegates; the top vote getter of 28 candidates, and the first ballot winner,  was the only elected official running, Clinton's Sen. Rita Hart. I ranked her high myself, as I didn't know most of the others.

The other proxy war in platform debate was minimum wage, and this is likely to be the number one national platform fight. Sanders supporters strongly want to specify $15 an hour. They may win this one, and as an Overton Window negotiating point that doesn't bother me a bit.

But one thing to remember: Even if Hillary crushes Trump in a landslide, gerrymandering and social separation may mean that there aren't 218 winnable Democratic House seats. The next president is likely to be on defense much of the time. What difference does a platform plank of $12.50 vs. $15 make if you're facing a Republican House that doesn't believe in any minimum wage? 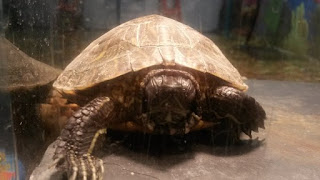 Shelley. Because she has a shell.


Instant Runoff Voting did NOT speed things up.  Some convention steps cannot be speeded up. If 50 people run for a job, that's an hour of one minute speeches. If a candidate is trying to hit four districts, there's inevitably an interruption.

But the longest delays, the cause of down time, and the reason for 1:33 AM adjournments, has always been voting, more specifically vote COUNTING. In an effort to pick up the pace, Democrats introduced an IRV system of ranked choice voting this year. After a test ballot with ducks (incredibly, AFLAC! was not included), most people caught on.

We wound up casting fewer votes than in past years, but the process took just as long because counting them became more complicated. I don't know the rules, and in fairness to them I didn't offer to help on the rules committee. (In fairness to me, I think I paid my process dues for the year already with organizing our county caucuses and co-chairing county credentials.)

The problem I had with IRV was having to make too many choices. It's hard to choose your top 18 out of 28 candidates for two delegate slots. The top three or four were easy, and in some contests I voted Hell No from the bottom up first. But after 28 speeches, that seventh or eighth choice becomes a blur. In my contest for elector, we had roughly 30 candidates and were asked to pick a top six, and that seemed more reasonable.

Thanks, Washington County. The host county did a great job arranging things. It helps that county chair Lorraine Williams has a fantastic restaurant. She not only catered the lunch for a county party fundraiser - when things ran later than the "expected" 5:00 close (Zach Wahls noted that PM vs AM was not specified), she quickly organized a pasta dinner that she sold for a free will donation. (By 7 PM some delegates were out of cash.) That kind act made it possible for dozens of delegates to stay and keep working. But in retrospect, Lorraine, I'm sorry that I asked you at about midnight if you could also cover breakfast.

The rest of the Washington County party sold drinks and snacks at a minimal markup. A dollar for a Coke is below vending machine rates yet still yields a small profit. Amazingly, they still had a small supply of pop and doughnuts available at midnight.
Posted by John at 5/01/2016 03:04:00 PM No comments: