The beauty of the mechanics of the universe, one of God's greatest miracles.

Since I was six years old, during the 1970 event, I have wanted to see a total eclipse of the sun. On Monday, that dream came true. Words have largely failed me since, but as part of my new blogging plan of taking my tweet storms and Facebook posts and archiving them here, I'll try to sum up.

And dude, Total Eclipse is a band you gotta see live.

Since seeing the eclipse, I have not been in the mood to Facebook fight about counterproductive political crap, and I'm trying to keep that euphoria going. Though politics, as always, came up even on Eclipse Day.


But Twitter's winner for the day without question was The Boss:


Remember to wear proper glasses today when viewing the #SolarEclipse. You don't want to get... https://t.co/mNJPZwPIz4
— Bruce Springsteen (@springsteen) August 21, 2017

I missed the first day of early voting for the school election:

#Eclipse instructions to mark your ballot: "Draw a moon completely covering up the sun next to the candidate of your choice" attn @jcauditor
— John Deeth (@johndeeth) August 21, 2017

(Don't worry, I got voted on Wednesday.)

So the eclipse was everything I wanted and more, and now I'm trying to choose a spot for April 8. 2024. I'm thinking Cleveland and the  Rock And Roll Hall Of Fame. Maybe Bruce will loan me some eclipse shades.

I'm happy with the way things went down at the Farmer's Market.

Vendor has idiotic opinions, looks even more foolish trying to defend himself.

City says no, we can't ban him or break his contract just because of his opinions.


Citizens organize, express their opposition to his opinion, inform the public, and recruit other vendors to their side.

Other citizens decide they would prefer not to do business with a bigot. Business suffers. 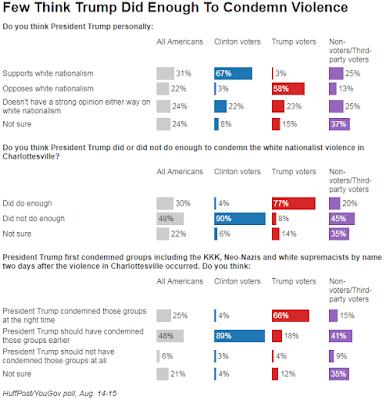 There's a lot of scary numbers in this HuffPo poll, but my takeaway post-Charlottesville is: Ballpark of 20% of America really believes this crap. Not to the swastikas level, maybe, but they really do think that Those People are Out Of Line and need to Get Back In Their Place, and that the tiki torch brigade "took it too far" but had some good ideas.  And they would say so themselves if they felt the social and economic independence to do so.


These are the voters who nominated Donald Trump, specifically because of his ethno-nationalism message, spoken openly rather than in thinly veiled code.

But he was elected because the rest of the Republican Party was willing to ignore it.

If "mainstream" Republicans had been serious in their "Never Trump" denunciations, they would have abandoned party for the only viable Stop Trump candidate - Hillary Clinton. That's what many did in 1964 with the then-inacceptable Barry Goldwater. They punted, then they won four years later. And there were fleeting moments of hints of this around convention time.

But those hints faded. First, no one thought Trump would actually win, Then, at end game, they knew he Trump would sign whatever McConnell and Ryan would pass and would appoint staunch conservative judged. So they were willing to overlook Trump's explicit racism/sexism in the hopes he would tone it down once in office, and would be content as a figurehead - which he is in some ways

But the racism/sexism is the one thing Trump really believes, and the mass rallies are the one aspect of the "job" he enjoys. He never wanted the JOB - he wanted the WIN. And beating the most qualified woman in American history just made it sweeter for him.

Part of the problem is Trump, but the bigger problem is the 20% or so of America that actually supports his ethno-nationalism. This is the stock in trade that Steve King has been peddling for 15 years - the anti-feminist, anti-immigrant, anti-liberal stuff that his constituents can't quite define, but can label as "political correctness."

I was saying this months before the caucuses and years ago about Steve King: the Trump base genuinely wants a white monocultural America. They voted for him because they literally want the wall and actually believes in mass deportation. They haven't quite figured out what to do with African Americans yet, but they know they don't want to hear anyone speaking Spanish or any other foreign languages in America.

And I think Trump actually wants these things too. I thing he legitimately does believe that anyone who is not a wealthy white American male is a lesser being. His base is willing to overlook the "wealthy" part, because they dream of becoming rich themselves

It's these cultural things, not "economic anxiety," that shifted the non-college white male working class to Trump, and the only way to win them back is to abandon  the true multicultural base of the modern Democratic party. Which is why, though I will go down fighting, I believe Iowa is lost. We are too old and too white. Texas and Georgia and Arizona will flip to the Democrats, but Iowa is moving the other way.


I say this privately a lot and rarely get disagreement - but you get pushed out of discussion groups if you dare suggest, for example, that the 4th CD is not winnable under any circumstances for a Democrat. Or that a message of Socialism! and Revolution! will win back old white men who are pissed off about "political correctness" because they got called into HR for telling the same Mexican Walks Into A Bar joke their dads used to tell. To these guys, Donald Trump is an aspirational fantasy - a guy (apparantly) so rich that he can day and do anything he wants with no consequences.

And I'm tired of being expected to pretend shit that ain't true.

I don't see a scenario in which the business/mainstream wing of the Republican Party is willing to abandon Trump, the Trumpists, and Trumpism. And that is a big big part of the problem.

I spent way too much of 2016 reading and re-reading Rise and Fall of the Third Reich. But from that I remember that the Nazi base, the core of genuine anti-semitic Brown Shirt Support, peaked at about 20%. It was only when the Nazis became the de facto party of big business to stop the left that they became the largest party in 1932.  So the "mainstream" conservatives bore some responsibility then - as they do now.

The other fatal mistake in 1930s Germany was the bitter split between center-left and the far left, spurred by the dogmatism of the far left. The Communists were more focused on defeating the Social Democratic Party, which they called "Social Fascists," than in beating the actual fascists. And I fear the repetition of that mistake.
Posted by John at 8/17/2017 06:55:00 PM No comments:

I hate having to agree with Paul LePage, the Little Trump of Maine, but he does have a point:

Gov. Paul LePage said again Tuesday that he would propose increasing the age to vote or join the military to 21 to be consistent with a new law hiking the legal age to buy tobacco.


“This law subverts the United States Constitution and attempts to ‘social engineer’ legal behavior by adults who want to use a legal product that you don’t like,” LePage wrote to lawmakers on Tuesday. “If you don’t believe 18-year-olds are adults who can make their own decisions, then I hope you will support legislation that increases the voting age to 21 and prevents military service until a person turns 21.”

Unfortunately for LePage, two things would stand in his way: the U.S. Constitution and the U.S. military...

The 26th Amendment, passed in 1971 was only in part about voting rights. It was about the age of adulthood, and really about Vietnam and the draft. "Old enough to fight, old enough to vote" was too powerful an argument to ignore, and rather than give up the Vietnam draftees, they decided to lower the voting age, and the amendment passed in record time

So in the middle of the most unpopular war in our history, we decided by a supermajority that 18 year olds were adults. We believed it so strongly that we locked it into the Constitution itself.

As the 70s continued, we expanded that 18 Is Adult concept into other areas of the law, most notably the drinking age. But by the 80s we started rolling those rights back, starting with the drinking age, and now continuing into smoking.But we did it differently. We had expanded adult rights to 18 year olds by enshrining it in the Constitution. But in the 80s with alcohol and now with tobacco, we're taking rights away by mere legislation & ordinances.

The fact that we put it in the Constitution, rather than passing mere legislation, means a lot to me, and that needs to be part of any discussion of the issue.

Sadly, in this era you probably could pass an amendment taking the vote away from 18-19-20 year olds, especially since they vote disproportionately Democratic, and disenfranchisement seems to be Page One of the GOP playbook these days.

Through the three bar elections, it was nearly impossible to get anyone to engage me on the issue at this level. It's always: "Yeah, but I hate drunk assholes." And, now, "I hate smokers." (So much of the rhetoric of anti-smokING is really anti-smokER and vilifies people for their own struggle with addiction.)Most people, even legislators, privately concede to me that 21 is not about 19 and 20 year old college students drinking. No one cares much about that unless they're doing something else that causes trouble. 21 is about 18 year old high school seniors buying for younger friends. To which I say, graduate people at 17, like Harry Potter and I did (oh, wait, Harry never went back to school for year seven) and punish actual offenders instead.

Maybe 18 Is Adult was a mistake, and I know far too well and personally the harm of young adult drinking. If I could change one thing about my life from 17 to 21 - my entire life, really - I would not drink. Alcohol abuse cost me an extra year of college, a point off my GPA and my first serious relationship.

But the age of majority should be consistent and I would rather expand rights than take rights away, even if those rights, like smoking, drinking, and gambling, are of dubious merit.Things would have been very, very different if, instead of expanding voting rights so they could keep shipping 18 year old draftees to Vietnam, they had raised the draft age to 21 instead.

All I know is no military recruiter should be allowed to contact or even SPEAK to someone who can't order a beer.