Vegas, Baby: A Series Of Tweets That Aged Badly

I looked at the Nevada crosstabs. 2/3 with voters under 40 and 50% with Hispanics in a field with six people seriously contesting the state. Unless something radically changes in the next week, which I hope, Sanders gets a too big to fail lead on Super Tuesday.

(UPDATE: Something radically changed. Continuing on with my thoughts at that brief moment:)


Trying to imagine how a CCI-Occupy style "coordinated campaign" with a non-Democrat leading the ticket is going to work for a agribusiness rural Democratic Iowa House challenger, when the alternative is not a Green New Deal Democrat but a home school Republican.

I'm not assuming there would BE a coordinated campaign. I assume there would be a Sanders campaign and that any down-ballot candidates who were not affiliated with Our Revolution would be on their own. Result would be a whole lot of ballots with only president marked. I can totally see Sanders hitting 75% in Johnson County and not winning a single other county in Iowa 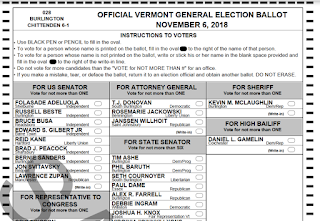 I'm not even assuming that were he to win the nomination Sanders would even condescend to appearing on the ballot with "Democratic Party" under his name. He can pledge to appear on the ballot in the general as a Democrat and he can get rid of the (I-VT) today, if he wants. He won't. Hostility to the party is too big a part of the brand.

If Sanders wins nomination (more likely than not) and if he cares about reaching out (less likely than not), respect for the Democratic Party as an institution matters to a lot of us who have been in the trenches fighting to make it better for a long time (30 years for me).  There's a lot of wise and experienced people within the Democratic Party who should not be thrown away simply because we prefer a different approach and don't salivate at the words "revolution" and "oligarchy."

I've long said losers don't get to make demands - but candidates who reach out to supporters of defeated rivals (Obama, Bill Clinton) tend to do better than those who say "F*** you, we won, get on board" (Gore, Kerry). But as noted, hostility to the Democratic Party as an institution is a core part of the Sanders brand, so I don't expect it. I think that's a net negative for him, but I hope I'm wrong.

Other thoughts on Nevada: I thought I was silly for giving all the caucus chairs a flipping coin, until Nevada gave everyone a deck of cards.
Cannot stop laughing at these big empty Nevada caucus rooms. Heard MSNBC saying early vote was 2 to 1 or 3 to 1 over caucus attendance. Not sure if that was that precinct or overall. But explains empty rooms. My bet is NSDP underestimated how popular early vote would be. Also, NSDP is a terrible acronym because, well, NSDAP.
Posted by John at 2/23/2020 04:20:00 AM No comments:

While I have publicly ruled some candidates out, I have not endorsed because of my caucus leadership role. I want to thank all of the campaigns, including those no longer with us, for their help and support through the last 8 months.

Four years ago I made a point of walking over to the Uncommitted corner first. I don’t think I fooled anyone, most people had figured out I was with Hillary, but I wanted to make that point.

But with the raw vote being reported this year, I want my first alignment choice to be reported for a candidate rather than Uncommitted, and I might as well be open about it. And I’ve worked hard enough that I deserve my say.


Koni and I will caucus for Elizabeth Warren tonight.