By popular demand: the school board number cruncher

There seems to be popular demand that I write a post mortem of the just finished school board special election and while I don't want to disappoint I don't entirely know what to add either. "An original contribution to knowledge" is about the only thing I retained after dropping out of grad school, and sometimes that keeps me from commenting, but I'll just reiterate what others have said and put a beret spin on it.

Despite the off-cycle midsummer timing, Tuesday's vote was the third-biggest school board vote ever in Iowa City school district history, trailing only the last two, the 2013 record-setter and the 2015 close second. And both of those had large fields of candidates competing for multiple seats, not two (serious) campaigns vying for one slot.

Put another way: We saw more votes Tuesday than we did in the 1995 school election that had a bond issue on the ballot, which stood as the record till `13. Some of that turnout growth is population growth. But some of that is contentiousness growth, much of it on geographic lines.

20 years ago, the ICCSD was relatively united, with even the east side voting strongly for "A New Elementary School Building In The Northwesterly Portion Of The School District" (you and I call it Wickham).

But yesterday, we were back to the east-west split that we saw most clearly in 2013 and a bit less in 2015. Winner Paul Roesler secured his 326 vote win over J.P. Claussen with east side landslides: 70% at Lemme, 64% at Mercer, and 66% at Horace Mann - a polling place on the north side, but with a lot of voters from the Regina neighborhood.

Those were the places where turnout seemed to be up from the election I used for my benchmark for turnout estimates, the February 2013 vote on the revenue purpose statement. (As you likely know, the turnout estimates are part of my actual JOB job.) (We had 6082 voters in that election. I panicked when early voting spiked at the end - about 1400, compared to about 900 in February 2013. If election day voting had jumped that much, we would have been scrambling for more ballots and workers - but I relaxed a lot at the 9 AM turnout update when it appeared that the shift was more a matter of: people had their mind made up and voted earlier. We ended up at 5761, pretty darn close (a handful of absentees are still out but not very likely to come back).

Claussen, for his part, did best in Coralville (73%), North Liberty (62%), and statistically insignificant Hills. (Hills cast less than 1% of the district's votes.) Another 150 votes each from North Liberty and Coralville would have about made the difference for Claussen. But on the west side of Iowa City, which has sometimes allied with Coralville and North Liberty, Roesler had a solid 60%.

So most people were looking at this as a de facto referendum on the school map, with Roesler arguing to keep the plan and Claussen arguing it should be revisited, to oversimplify a whole lot.

In this dynamic there simply wasn't room for a third contender, and I have to put this tangent somewhere: Who the hell is Janice Weiner and what was she doing in the race? I heard a rumor there were signs but I never saw any. I would say she was a Some Dude self-starter but her professional background made her seem more serious on paper. But she ran an amateur campaign and finished with a dismal 4%. Not viable for a future race... unlike Claussen who immediately announced for 2017.

That geographic divisiveness is going to be a big problem for the Giant Bond Issue that will come down the pipe some time in the next couple years. Those need 60% to win. And any time you have money on the ballot, there's about a 20% automatic No vote who just doesn't want to spend money on anything. So you have to get your 60% out of only 80%... or put another way: you have to get 3/4 of the voters who would even consider voting yes to sign off on the specifics of the plan. You can't do that with a divided district, so either the east side or Coralville/North Liberty more or less has a veto.

Feelings were strong and no matter what you thought, the other side was obviously racist. A mere reader of local newspapers, if we still had one, would have completely missed the real campaign being fought out on Facebook. For me, the high point was a battle between Supervisor chair Rod Sullivan and ex-mayor Matt Hayek in the Johnson County Dems Facebook group. Hayek suddenly, after having been absent since he led the Johnson County Chris Dodd campaign to zero delegates, suddenly became interested in the Democrats for the purposed of supporting Roesler. Sullivan fired back that maybe Hayek should actually do something for the Democrats, while Hayek whines "moderates" had been "forced out" of the party.

The irony here is that the old guard city councils, up through and including the Hayek Era and going back 30 plus years, are the ones who created the school district crisis in the first place, by shunting all the affordable housing into the attendance areas of the same two grade schools and by relying on the "market" to control itself. The new Core Four era council is looking at correcting that and requiring affordable housing in parts of Riverfront Crossings which is 1) my neighborhood and 2) the part of town that was the first to get its school, Roosevelt, closed.

But: With Core Four mayor Jim Throgmorton and progressive rising star Zach Wahls both endorsing Roesler... can we really call this election "the revenge of the Old Guard," a label that's already getting rolled out? That was a dynamic, sure, bit it's not that simple. Progressives were present in both camps.

One thing that did backfire, though: the effort to play the party affiliation card. I'm absolutely convinced that was what cost Pat Heiden the supervisor primary. In the midst of that flap in May, Roesler quietly and pro-actively changed his affiliation from Republican to no party, a fact that was noted loudly in public soon after the campaign started.


But what worked in a Democratic primary failed in a school board race, where there's still a strong sense that the office is supposed to be non-partisan or, as some people hilariously put it, "not political."

Despite the narrow loss and the divisive election, the Claussen campaign and the coincidental timing of the race with Bernie Sanders' concession and endorsement did bring some unity to local Democrats (by that I mean actual, active Democrats, not Matt Hayek). Key local leader of both Sanders and Hillary Clinton were both in the Claussen camp. In a county where Donald Trump will struggle to hit 25%, and where the real threat to Hillary is the Libertarian and Green percentage, a little more unity is a lot of a good thing.
Posted by John at 7/20/2016 08:22:00 PM 1 comment:

Inclusionary Zoning At Last (with a big asterisk)

Don't get me wrong. The Iowa City Council's decision last night to FINALLY mandate affordable housing in a new development, Orchard Court (part of Riverfront Crossings), rather than rely on the kindness of developer's hearts. is a big win.

It's a win that would have been impossible without the Core Four victory last year. Elections have consequences, dontcha know.

But there's a big asterisk on that win, one that I can't help noticing because it is literally in my backyard.

Along with a lot of downed tree limbs from last night's storm.

Actually, my front yard. Riverfront Crossings is next to, kind of part of, the Miller-Orchard neighborhood, where we've lived the past nine years. 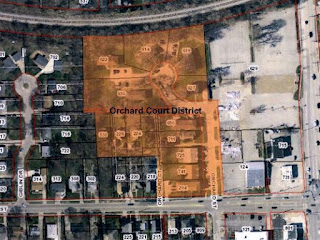 My house is literally in this picture.

Miller-Orchard is what I'd call working class, a few empty nesters, a few couples with first starter home fixer-uppers, with a noticable trend toward students since Roosevelt School closed in 2012. We're also a neighborhood without much political clout, as the Roosevelt closure proved.

And that kind of sort of helps explain why this move was relatively smooth, and less controversial than, say, if they'd mandated affordable housing out on Kennedy Parkway.

Riverfront Crossings is a great foot in the door for inclusionary zoning. I personally hope to stay in Miller-Orchard long enough to see it become a reality and welcome my new neighbors.

But I also want to see how the neighbors react if we try mandatory inclusionary zoning next to Windsor Ridge.
Posted by John at 7/06/2016 06:52:00 PM No comments: