UPDATED: For not the first time, the Secretary of State has changed the game plan, as announced at a training of election staffers this week; in a surprise there has been an improvement.

Iowa voter cards will have a new look this week as the details of the state's new voter ID law kick in, starting with a big mailing this week.

Under the provisions of House File 516, an Iowa driver's license is the default voter ID. (This also includes Iowa DOT non-driver ID cards. For the sake of brevity, from here on out every time I say "license" I also mean "or non-driver ID.") There are some other limited options, but these options do NOT included licenses from other states or student IDs.

Voters who do not have an Iowa license are supposed to be sent a special ID card to use instead. This provision of the law was added, likely with some reluctance, to help HF516 withstand legal challenge. Rulings on laws in other states have held that, if a voter ID is required, a free alternative must be allowed.

Over the weekend of November 18, the Secretary of State processed a cross-reference between the Iowa license database and the driver's license database. They also changed some reports in the voter system so that new voter cards will conform to the details of the new law.

Many voters who actually have Iowa licenses did not have them on their voter records. Some simply left them off the registration form, because more people remember their Social Security numbers than their licenses. One or the other is required (I'm skipping some detail here). But most of the newly included license numbers were for people who registered before 2003, when the federal Help America Vote Act (HAVA) kicked in and we started asking for license numbers.

During debate over HF516, the Secretary of State's office frequently cited 85,000 as the number of active status Iowa voters without an Iowa license number, but after processing, that estimate has jumped to 123,000. Under terms of HF516, the Secretary of State will do the initial mailing to these voters. After that, voter ID cards will be sent out as part of the routine work of processing registrations by county auditors (translation: I get to do it.)

There will be two different kinds of voter cards. The terminology is a little confusing, and which one you get depends on whether or not you have an Iowa license. They are fold-over cards and look identical from the outside. 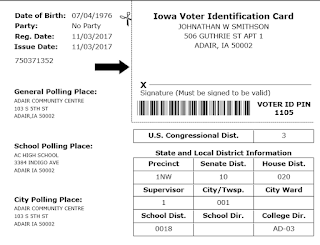 This is the "Voter ID" card that people without Iowa licenses will get. The initial mailing to the 123,000 people currently registered without an Iowa license is scheduled for December 6 - a very off-time for the election cycle, so many of these very very important cards will be ignored, misplaced, or discarded before they're needed next year.

In a change from the original plan, this first wave of cards will be mailed in an envelope with a page of explanation. After that, they will get sent as cards.

It's worth noting that these cards look very, very different than the Iowa licenses that most people will be showing. That singles out these voters and makes them more obvious to people who want to challenge voters at the polls.

See also the PIN listed just below the signature space. If you don't have an Iowa license and want a mailed absentee ballot next year, you will have to include this obscure piece of data on your request form.

And, in a nasty bureaucratic twist: Even though your friendly local election staffer can look at your voter record and see this number, they cannot use it to complete your form. They will have to contact you by phone or by snail mail, during an early voting window that has shortened from 40 days to 29, to get you to give them a number that your friendly local election staffer can not only see, but that they can find more easily than you can. 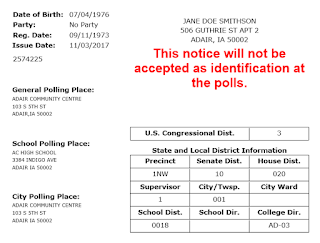 Voters who do have an Iowa license will not be part of this week's mailing. They will still get a card in the mail whenever they update or change registration. But this will be called a "confirmation card" or a "verification card" to distinguish it from the "ID card."

Note the prominent "This notice will not be accepted as identification at the polls." (It may not be in color depending on your county and its printer.)

One not as big but still significant change with these cards: The correction and change space that was on the old voter cards is now gone. That was an easy and fast way for voters to make changes by mail. Just write in the stuff that changed and sign it. Now they'll have to complete a full voter registration form. There's also a bar code missing from the confirmation card that used to speed up my work a lot.

Both of the new cards were programmed into the state voter registration system over the weekend of November 18, so there are a few already in circulation. After the initial mailing by the Secretary of State next week, both these cards will be mailed out by auditors regularly, each time a voter registers or makes a change. Which one you get depends on whether or not you have an Iowa license.

Any time there is a large voter card mailing, many cards are undeliverable. When mailings are returned as undeliverable by the post office, auditors are normally required to place voters on "Inactive" status, a preliminary step to cancellation. Voters who are inactive through two general elections get cancelled.

Because of the voter ID law, there's an extra mailing going out to a particular, non-random group of voters, and because they're being sent an extra mailing, they're more likely to have a card returned to sender.

In a big change of plan that seems to have been written by lawyers, this one-time mailing will be an exception. The letters (envelopes with a card in them, that is) will go back to the Secretary of State, not the auditor, and voters will NOT be inactivated from this mailing. That's because inactivating people from this mailing could be seen as illegal "targeting" of certain voters.

Since they're not getting inactived, this isn't AS horrible as what I had feared at first - but sill, these are the people who need to get these cards to vote. And the population getting these cards (or not getting these cards) is the most mobile and least rooted group of voter, exactly the kind of people that the legislators who passed this law would rather see not voting.

Many conservatives (and even some "liberals") have never gotten over Symm vs. United States, the 1978 Supreme Court ruling that held that yes, college students DO get to vote in their college town. Most people have begrudgingly accepted that students should get to vote for president (the only ballot most students actually cast) but resent young people weighing in on local things like tax questions or how old you have to be to get into the bar.

The unspoken implication of HF516's refusal to accept valid out of state licenses and student IDs at the polls is: Kid, you're supposed to be voting an Illinois absentee ballot. But 20 years on the job tells me that the most likely way a student gets to cast a counted vote is to do it at school.

After the Secretary of State's match-up between the voter file and the license database, there were 7030 Johnson County active status voters without Iowa license numbers, who should be getting cards in this week's mailing. That's 7.7% of the county's total active registration.

Because the last "big" election was the presidential, most voters have not updated their address since the fall of 2016. In my town, most young people move every year on August 1, so the voter ID cards will be getting mailed to LAST year's address - which means more cards returned to sender and not getting delivered.

So let's guess at just how accurate these addresses are.

4324 last voted in the presidential election, and these voters are likely still registered at their fall 2016 addresses.

Any of these people needing to re-register will need to do a paper registration form - because Iowa's online voter registration system is only good for people who have Iowa license numbers.

Here's some more stats on the 7030 voters without license numbers.
Mail can be iffy, especially at the holiday season. Anyone who believes they should have gotten an ID card (remember, only the people without Iowa licenses will get these) and hasn't gotten one by Christmas should check in with their auditor.
Posted by John at 12/03/2017 04:20:00 AM