Kander spoke at the University of Iowa College of Law, and was also scheduled to speak at Drake Law Tuesday.

While a losing Senate bid may seem like an unlikely launch pad for national ambitions,  Kander is still seen as a Democratic rising star. He'll be back in Iowa City on Oct. 21 at a fundraiser for state Senate Democrats, and Let America Vote recently opened a Des Moines office.

"If politicians make it hard to vote, we'll make it hard for them to get re-elected," goes the Let America Vote tag line. "There urgently needs to be a political argument against vote suppression," said Kander. "This is not just a policy difference, it is a political strategy. Rather than change their policies, Republicans want to exclude people from democracy."

"Donald Trump's claim of 3 to 5 million illegal voters is the biggest lie a sitting president has ever told," said Kander, to which a student in the crowd replied, "Wait an hour."

Kander also took a shot at Iowa Secretary of State Paul Pate. While legislatures and governors usually take the lead on voter restrictions in states where they have full control of government, he said, "Iowa is the only state in the nation where the Secretary of State personally proposed the voter ID law."

In contrast, he said, "I'm the only statewide candidate for Secretary of State who has run an ad against photo ID and won." ID laws remain popular on the surface, because of the common I Have To Show ID For Everything Else simplification, but Kander says support for ID laws may be shallow.

"When Texas chose which IDs for voters to use, they picked drivers licenses and gun permits -  the two databases that are the most white," said Gerry Hebert, a Georgetown law professor who recently argued before the Supreme Court in a Wisconsin gerrymandering case. "We deliberately used elderly black veterans with long voter histories when we challenged that law and won."

Hebert doesn't always win - "If you're interested in losing a Supreme Court case 5 to 4, I'm your man," he  joked - but he's more optimistic in Gill v. Whitford.  "We think we have a workable standard of gerrymandering and we are hopeful we may have five votes." 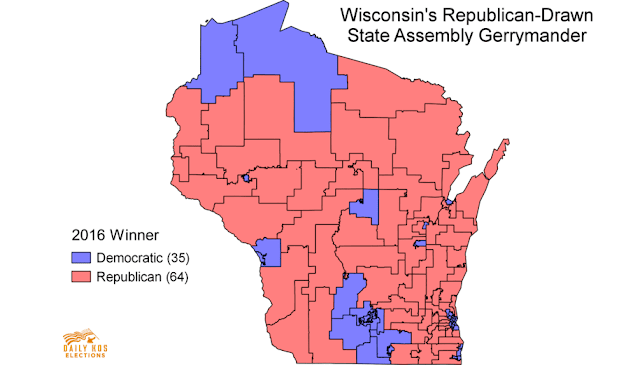 In many states "redistricting really is a one party system, the Incumbent Party," said Kander, and historically that's how evenly divided Wisconsin drew its maps, until Scott Walker's Republicans took full control of state government in 2011 - just in time for redistricting.

The Wisconsin map under challenge was described in internal Republican documents as "Aggressively Maxed Out," the most partisan of several drafts. The question at hand is how to measure gerrymandering for partisan purposes, which Hebert says is "Theoretically possible - but the bar is extremely high."

What's new in the Wisconsin case is a measure called an "efficiency gap test," which compares the overall vote to the outcome in individual legislative races.

Hebert noted that Justice Anthony Kennedy, the swing vote in the case, directed particularly tough and pointed questions at the Wisconsin officials defending the map, while his own arguments were described in the Milwaukee newspapers as "Atticus Finch-like." The envy in the room from the aspiring lawyers was nearly audible.

"Right now the Court is as good as it will be in at least the next four years, said Hebert. "This may be Justice Kennedy's last term. The window is closing."