21 Bar Vote Is A Rights Issue, Not A Health Issue

21 Bar Vote Is A Rights Issue, Not A Health Issue
A Deeth Blog Endorsement

You've probably noticed that I've been unusually quiet about the 21 bar battle lately. I have friends on both sides of the issue who sincerely believe their frame surrounding the issue is genuinely what's best for the community.

I'm sympathetic to many of the public health arguments of the 21 side, as I understand the problem of young adult alcohol abuse and the college party culture all too well. I recently celebrated the 25 year anniversary of my sobriety. My youthful alcoholism cost me about a half point off my GPA and my first serious relationship.

I even agree with the actual ordinance wording - that the bar admission age shall be 'the legal age.'

It's just that I believe that age should be 18.

I am deeply disappointed that the drinking age issue hasn't been more prominent in this debate. This was a rare opportunity in a general election environment to discuss the folly of the federal legislation, passed right around the time I was swimming in beer, that linked highway funding to the 21 age. (It was the brainchild of Elizabeth Dole, who lost more elections than she won.)

But neither side wants to go there, preferring to focus on "safety" issues, except for the 21 side deliberately brushing the drinking age issue aside. "This is not about the drinking age, which we cannot control," Mayor Matt Hayek writes, carefully defining the question around what 21 supporters know is their weak point.

Of course it's about the drinking age. And of course the drinking age can be changed. It's not locked into the Constitution, it's mere legislation. Our federal lawmakers can change it. If not, our state legislators can tell the Feds to shove the highway money. If we need more roads -- I don't happen to think we do, but if we do -- raise my taxes. (I didn't say it would be easy to change.)

What IS enshrined in the Constitution is the 18 year old voting age. In 1971 we as a nation made a wartime decision, by the overwhelming consensus-level majority that a constitutional amendment requires, that the age of adulthood was 18. Yet on this one issue, this one super-special item, we have a separate higher age, which has backfired by magnifying the forbidden fruit aspect of "underage" (sic) drinking.

Rights issues are often uncomfortable. Sometimes rights are hurtful and have unsympathetic protagonists (Larry Flynt. Fred Phelps, Illinois Nazis...) But it's about the principle, not the pragmatic, and the true progressive stance here is to stick up, however reluctantly, for the frat rat's right to make a drunken ass of himself.

But even the few prominent leaders who privately support 19 have been reluctant to speak up; only the students and bar owners have. {What's more disappointing is the people who privately agree with me that the 21 drinking age is an unenforceable failure, yet are publicly backing "21 Makes Sense" (sic).}

No, the small-l libertarian steak of the local left is dormant. Instead our progressives have shown an unfortunate blue nose tendency, linking the rights issues to the end results. It's a long time problem. Prohibition was considered a "progressive" stance a century ago, in the original Bull Moose Progressive Era.

We saw it a couple years back in the anti-smoking movement, as "public health advocates" couldn't hide their underlying contempt and disgust for tobacco addicts as people. Just say no, they seemed to say, forgetting how ineffective that Reagan-era phrase was, ignoring the cognitive dissonance, ignoring the realities of all evidence about the nature of addiction.

And there's something patronizing in the pro-21 arguments. Bob Welsh writes: "There are many times our youth want to do various things and we as parents need to say, no. This is a time when we as a community need to say no." I know Bob and I know he's sincere. It's not that anyone's being deliberately mean-spirited here. (There's been back and forth finger pointing, but one thing we have fortunately managed to avoid - so far, but there's still a couple weeks left - is the ugly "students shouldn't be allowed to vote" rhetoric we saw in the conservation bond battle two years ago.) But it's just inherent to the argument; we know what's best for you, in spite of your own wishes.

The underlying attitude of many of the "townies" seems to be: We love the Hawkeyes, we love Hancher, but those undergrads are sure annoying. Yet you can't have a major university with nothing but tenured faculty and invisible grad students who never leave the lab. Without our young adults, without those immature and inconvenient freshmen and sophomores and juniors, there is no Iowa City as we know it. 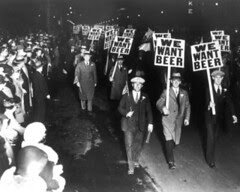 Young adults want adult fun. And again, that special, adult-plus 21 line defines drinking as "adult fun." I'm not pretending that "adult rights" means 19 year old undergrads will sip on one genteel gin and tonic while earnestly discussing their literature class in a quiet pub. They'll drink two or three too many beers or candy flavored cocktails, dance, and dubiously hook up.

Is it good that the University of Iowa has a regional reputation as a party school? Probably not. Do I wish the students were climbing the rock wall at the new UI rec center on a Friday night instead of puking on the Ped Mall? Absolutely. Am I happy that the only issue that's driven young voters to the polls in this town in my 20 years here is Fight For Your Right To Party? No. (Special note to my undergrad readers: that's a song from back before you were born.)

Like I said, rights fights are uncomfortable sometimes. But that's the real question here: whether young adults have the right to make their own decisions and take responsibility for their own mistakes, like I did, or whether we want to return to the in loco parentis attitudes of the 1950s.

I know from my own difficult experience with alcohol that you can ONLY learn from experience. Only when we drop the Nancy Reagan Just Say No rhetoric and separate the age issue from the abuse issue, and recognize the rights and wishes of young adults, can we Old People gain any credibility with those same young adults to address the very real problems of binge drinking.

I am voting "yes" as well, Deeth, for some of the same reasons you've addressed in your post. Not only is is it a rights issue, but for me it's philosophical issue as well. I cannot support anything that undermines the alleged age for when our society determines adulthood and any legislative action that undermines this merely retards the maturation process implicit in being a legal adult.

Moreover, just because patrons are allowed patrons under 21 into bars that serve alcoholic beverages does not automatically hold that all of them are there to drink alcohol. Drinking under the age of 21 is still against the law and should be enforced until it's overturned, which it should be. Given the fine for PAULA tickets now, nearly $900, the peace officers already have what would have served as an effective deterrent for me when I was an undergrad and under 21. However, I moved to Iowas City one month before my 21st birthday and had already served active duty in the military and was a Veteran, yet I could not drink legally in the US.

For me this is a an issue about responsibility and when we are going to sever the umbilical chord to adulthood and actually treat adults as adults, who make mistakes and ideally, grow from their mistakes, preferably when they're younger.

I could go on and on as to how our society, helicopter parents in particular, is guilty of enabling their kids and have done a complete disservice to burgeoning adults, who may learn the same mistakes their parents did when they were younger, had their parents not been hovering over them and gagging them between every chug of beer.

I, too, am voting "Yes" for 19 and protecting adulthood.

T.M. Lindsey
A legal adult who is responsible for everything written in this comment

I agree, it's inconsistent. I would either lower the drinking age or raise the age of majority (including military service, voting right, the right to contract etc.) to 21. It's ludicrous to have this graduated pseudo-adulthood.