I've already lobbed a few rhetorical grenades into the navel gazing of How Did The Justice Center Lose And What Next. They've been counter-intuitive enough that more than once I've had to remind folks that yes, I did support it. Worked pretty hard on it and stuck my neck out pretty far too.

Still am, in fact, as I try to Define The Defeat and Fix The Flaws. I've been meaning to back up my hunches and biases with numbers, and I have too many numbers for anyone's attention span for one straight through read, even me. So I'm chunking it into two parts.

Tomorrow, I hope, I'll look at where the votes came from (reference). But before that, we need to ask: Is context everything?

After years of battles over Where and What, there came the question of When: the timing of the election. The previous defeat, in 2000, came on presidential election day. On one side was a sense of fairness - shouldn't we vote on this in the highest turnout election? - and concern about the cost of a special election. Or, perhaps, concern about the cost of an election becoming an issue in the election, which sometimes happens.

On the other hand there was a perception, and I believe I'm paraphrasing Connie Champion accurately, "the students will all vote No."

Is that really what happened? Did high student presidential turnout cause the loss? If you want to stop reading now: probably not. But you know you want more.

The justice issue was not the center of attention, but just one of many things - the very last thing, in fact, on a long ballot. This meant the campaign - or rather campaign singular, since No wasn't really an organized campaign in the traditional sense - made its efforts in a context of Big. Rather than targeting, this number isn't random, the 15,000 most likely voters, Yes had to try to reach EVERYONE. Not quite everyone: it's about impossible to reach election day registrations.

Invariably, that's going to mean some dilution, if you're trying to mix your one packet of Kool-Aid into five times the turnout water. Aah, Kool-Aid. Some would say I drank it.

From experience I can tell you: if you're low on the ballot in a presidential year, it's next to impossible to get your message through. Even someone like Tom Harkin has trouble cutting through the presidential noise, let alone a local ballot issue. Even one backed by, as our detractors called us, "the entire power elite." 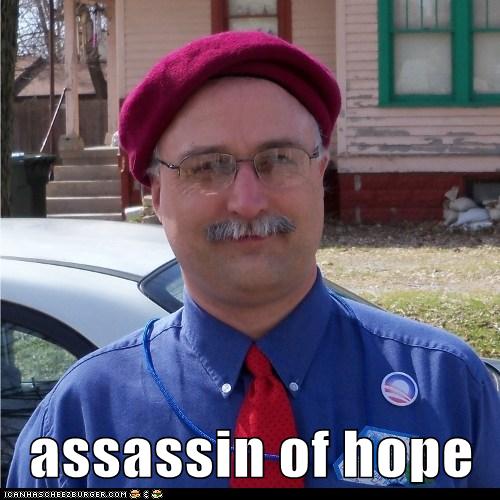 (Still having trouble seeing myself as part of any Power Elite.)


You never do get through to some people. Of the record setting 76,199 voters, 12,070 (15.8%) skipped the justice center question.  There's no way of course to cross-tab the individual secret ballots. (Of course, yet I have to say it.) But as a rough guide, 3,779 voters skipped the number two contest on the ballot, the congressional race. 222 skipped the presidency. Takes all kinds.

So let's assume for argument that roughly 3500 people voted president only. That leaves 8500 or so who started their way down the ballot but didn't mark the justice center. The 15.8% undervote on the justice center is up from the about 10% that skipped the issue in 2000. My theory: as GOTV efforts reach more marginalized voters, under-votes go up.

In a single-issue special election, of course, under-votes are almost nil. You get a couple. I wonder why that is: do they want to write in Maybe or Yeah But?

Actually, I think Yeah But might have gotten to 60%. I was kind of a Yeah But myself, after being a No But for a long time. Even a lot of opponents were acknowledging that something needs to be done... But. I've already discussed what I think But is here and here. There was the additional But of taxes but save that for part 2.

Twelve years ago, of course, the vote was not just No but Hell! No, two to one. This time Yes came tantalizingly close, in the awkward majority but not supermajority zone. I like you but Not That Way. Assuming the same turnout and the same undervote percentage, a shift of 2,797 votes from No to Yes would have passed it. Compare that to those under-vote numbers.

This near-miss means the inevitable do-over will be held sooner - a special election - rather than later - 12 more years or even the 2014 general election. That's a massive change of context.

In a local special election, you won't see the massive, party-driven early voting drives. 58% of the 2012 vote was cast before election day. That takes dozens of staffers and volunteers working for months, resources that are beyond even Local Power Elites. In a local special election, the absentee percentage is usually between 20 and 25%. People start paying attention later - which helps a late-starting, low-funded effort.

No one will be late starting next time, but I still don't see a conventional campaign with fund-raisers and mailings and ads coming from the No side. Of course, they won this time with just letters to the editor and a handful of signs.

Most obviously you won't see nearly as many voters. The turnout range for recent county-wide special elections runs from 9700 (the dead of winter 2010 supervisor special) to just under 15,000 (the spring 1999 sales tax). The only place round here that's ever done presidential turnout in a special is University Heights, and that was with an entire generation worth of Zoning War (always the nastiest local fights) focused on one lot.

The drop in non-general election, non-21 bar turnout is not consistent across the board. Voters virtually vanish from the student precincts. Could the student turnout get cranked up for a justice center special? Highly unlikely. Other than presidential elections or caucuses, only the bar issue itself has ever been able to do that. Even one step of removal, such as efforts weak and strong to elect students to the city council, has just been too abstract.

And the next possible special election dates are student-unfriendly: May 7, just before finals, or August 6, when people are just starting to move back.


So the voting universe is likely to look like a typical local special election universe (most recent example). How much could that variable turnout matter? We've circled back to the original question: Did high student presidential turnout cause the loss?

As an intellectual exercise I re-ran the results of the justice center vote through the filter of a lower turnout election. The model assumes that every precinct voted Yes or No in exactly the same percentages as November 6. A big if, but it's all we got. Then I multiplied those percentages by the smaller number of voters in a smaller election, precinct by precinct.

Skip the next bit if you bore easily (if so how did you get this far?) or trust my judgement on the model.


One problem with this model: we're early in the decade. The only prior election in the current precinct map was the June 2012 primary, which made the choice easy. To get the turnout up into the 12-15,000 range, I doubled it.

Using a primary brings with it its own set of variables. There was higher Democratic turnout, as the auditor primary was of more interest to more people than the Republican congressional race. There was also higher turnout in the six precincts in House 73 which had a hot legislative primary, so hot it's still being fought on line. I controlled for that by using numbers from the 2009 sales tax election for those places instead; the precincts in question kept the same lines, and based on the numbers in other unchanged rural precincts that seemed fair enough for this exercise.

Also, in a primary only voters affiliated with a party can vote. Changing party is easy - too easy in my opinion - but using primary numbers would tend to under-estimate independent voters. Fortunately for this model, the high-independent places tend to also be the places with low turnout in other special elections (read: the student areas) so it doesn't mess us up much.

Past the blah blah blah part? So Iowa City 5, the ur-student precinct with nothing but dorms, sororities and Sally Mason, split almost exactly 50-50. Both sides got 50% of 1672 votes on November 6; both sides get 50% of 22 votes in the imaginary special. In a townie precinct, at Helen Lemme in Iowa City 1, Yes got 64% of 1924 voters for real. In the imaginary special they get 64% of 626 voters. The Lemme turnout drops by 2/3 but the dorm turnout drops 99%.

Do that for the whole county.

All that explanation, all that math, and just a 1.1% shift. What does that tell us?

Nothing definite, given all the other variables. But if Yes had gone up FIVE points in a lower turnout context, that would have been a big deal. If the student vote had been 80% No, like it was in 2000, you might have seen that much of a shift.

So: I don't believe the decision to place the issue on the presidential ballot was what caused the loss. This means we have to look for other reasons. Which means more math and more writing; stay tuned.
Posted by John at 11/27/2012 03:00:00 AM