Not The Other Guy Winning in Virginia

No state level elections get national press overkill like Virginia governor's races.  Off-off cycle in an odd-numbered year, in the front yard of the DC press corps, and always an open seat race because Virginia has the last one term limit in the country.

Aah, term limits: a Nineties fad whose time has gone, just like "investing" in Beanie Babies, that great false economy of mass produced "rarity." How limited edition or "retired" can any stuffed toy from an Asian sweatshop be? 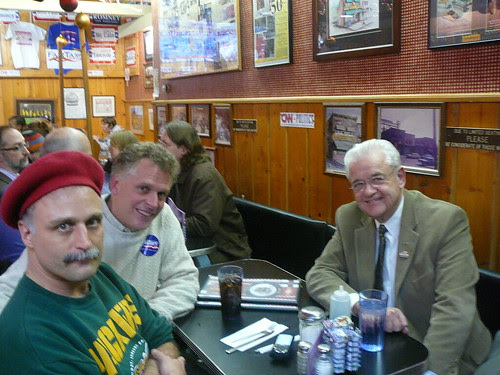 Awkwardness at the Hamburg Inn, December 2007: me and two of my "favorite" Democrats, Terry McAuliffe and Leonard Boswell. Their candidate, Hillary Clinton, never visited the Burg, a factor I blame for her Iowa loss. Bill, of course, went.


I have to admit I've never been the biggest Terry McAuliffe fan. He was moving the party right when I wanted to move it left, and I've always been more a grass roots guy than a big donors guy.

That said, I'm rooting for him next week. Not that he needs my help; McAuliffe is a lock to be the next governor of Virginia. UVA's Larry Sabato pointed out over the weekend: "VA & WV: America's odd couple. Much more than the Carolinas or Dakotas. VA flips Red to Blue while WV flips Blue to Red."

Both Clintons have campaigned for their old pal McAuliffe, which gives me an excuse to link to Politico and the 65,536th Hillary 2016 article:


Clinton barely engaged with Iowa voters in a meaningful way in 2007, a fact that came back to bite her when the better-organized Obama vaulted ahead. Voters complained throughout the race about a lack of access to the candidate.

In 2000, by contrast, Clinton made a point of visiting towns that had rarely, if ever, seen a Democratic statewide political candidate before.

The 2008 candidate never gave herself that chance, maintaining an ambivalent relationship with Iowa, where retail politics are at a premium. The 2000 campaign showed it need not be that way if Clinton were to run again.

But back to Virginia 2013, McAuliffe's impending win is, say nearly 2/3 of McAuliffe backers, more a vote AGAINST Republican Ken Cuccinelli rather than FOR McAuliffe. Cucinelli is bad enough that the congenitally Republican Richmond Times-Dispatch offered a rare None Of The Above endorsement. I don't have national stats, but editorial boards who believe in endorsements take it very seriously and feel a responsibility to choose however reluctantly. In two decades I've only seen our local paper do one No Endorsement.

The Charlottesville Daily Progress did that one better: they endorsed a write-in vote for incumbent GOP Lt. Gov. Bill Bolling, a popular figure who likely would have won a primary election, except that Cucinelli hard-wired the nomination process for a more conservative party convention.

All this, rather than the ЯOИ PAЦL Яᴇvoᴌution, is why the Libertarian candidate is polling in high single digits: he's the only None Of The Above on the ballot.

I've never liked actual None Of The Above as a ballot option, which Nevada has. Something feels wrong about it. Write-ins? Sure, if you're serious. But try to think outside the Disney universe. It's always Mickey Mouse, never Bugs Bunny.

We had one guy who used to write his own name in for every office. (Well, we don't know for sure but someone in his township did, and a spectacular act of ego is the most plausible explanation.) Then one year, all the people with one write in vote each for township trustee got put in the hat, and his name got drawn. He turned it down.

Anyway, I just feel like in the end you need to choose SOMEone. And this Virginia race reminds me of the 2006 Illinois governor's race. A rather flawed Republican, Judy Baar Topinka, faced an unpopular Democratic incumbent: 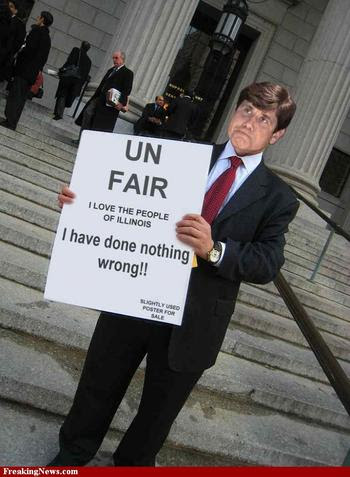 Rod Blagojevich was re-elected, though as we know his second term turned out to be a f%$!in' gold mine and he's now serving elsewhere: federal prison in Colorado, to be exact.

But even though he won, and even before he tried to line his pockets with the proceeds from selling the president-elect's Senate seat, enough voters had enough suspicions that the Green Party candidate won over 10% of the vote.

This wasn't some outbreak of vegan granola in the land of Polish sausages. No, it was just that the Green guy was the only None Of The Above on the ballot.

Speaking of Polish sausages and coronaries, poor Aaron Rodgers is stuck on a plane in "grill class" between the Swerski Superfans. I admire the ad writer for appreciating the history of the NFL's oldest and greatest rivalry, but it makes me look forward even more to seeing the Packers beat Da Bears next Monday night. The thrill of victory should carry me through the long Election Day to follow.
Posted by John at 10/29/2013 04:20:00 AM