It feels like an exercise in Don't Blame Us denial of the reality of Trump's America and Branstad's Trifecta to even take a close look at the elections results from Johnson County. That and the need to physically recuperate are why I've been taking this at my own pace. 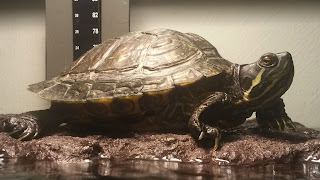 There's value, though, in looking at our local trends, and since no one else will and since my remaining readers demand it, let's dig in. If you're gonna read this, you may want this monster spreadsheet and the presidential numbers back to Warren G. Harding.

Hillary Clinton slipped just 1.44% and 466 votes from Barack Obama's 2012 numbers. Donald Trump, meanwhile, fell 3.8% and 2654 votes off Mitt Romney's pace. This left Hillary with a bigger raw vote margin over The Donald than Barack had over The Mitt.

That, of course, was a true three-way race with Ross Perot taking one in six votes here. This year the third parties got 7.4% but it scattered among the eight other options on the ballot... and some who were not.

Gary Johnson soaked up 3.6% of the total vote. Close to a third of that is the regular Libertarian vote (1.1% in 2012). My gut check is that more of the remainder came out of Trump than Clinton, if only because the Republican numbers dropped more and because of my unsubstantiated rule of thumb that Libertarians pull two GOP votes to one Democratic vote.

The Legal Marijuana Now Dude got about one vote a precinct. And if Gloria LaRiva of the Party for Socialism and Liberation stays on track, she should be POTUS by the 5016 election. Four votes in 2008, 10 in 2012, 35 this year. (Hey, I interviewed her, I get to make fun of the numbers.)

But the standout stats in the Also Ran numbers are the write ins. As recently as 2004, only 60 voters used the presidential write in line. That jumped to the 300 range in 2008 and 2012, largely thanks to Ron Paul and to a lesser extent the 2008 Hillary PUMAs. This year, the write ins tripled to 964, topping the 1 percent mark. Also notable: 536 people simply left president blank. 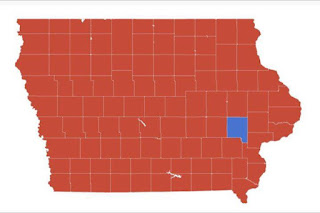 Dave Loebsack ran "only" 9.5 percent better here than in his next best county, thanks to a strong Jefferson County result. And Loebsack led the local ticket, with some 400 votes more than Clinton. Roughly 8000 voters cast a Clinton-Grassley-Loebsack ballot. The "Fluke" congressman has now been in DC longer than Iowa Democratic legends Dave Nagle, Berkeley Bedell, Dick Clark, or Harold Hughes.

At the precinct level, we see the same rural-urban split in Johnson County that we see in the nation. Iowa City proper was a 72-20 Hillary blowout. It should not surprise you but Clinton's lowest percentages were in the pure student precincts, with just a 59-33% at Iowa City 3 (west side dorms) and mid-60s in other student precincts. (Iowa City: where mid-60s is a weak D precinct.)

That's not write ins and not third party votes (Gary Johnson was at a consistent 2 to 5 % across the county). The simple fact that people always forget about college towns is that it is NOT the undergrad student vote that makes them liberal. A lot of those undergrads are from small Iowa towns or outer Chicago suburbs and still to some extent follow parental leads. No, what makes college towns liberal is grad students and faculty and staff.

Which is why Clinton's best numbers were in that next layer out from downtown, the near east side, topping out at 82-11 in precinct 18 (Longfellow) and 80-13 at precinct 17 (the former City High precinct). In Johnson County, even the `burbs are better than anywhere else in the state for Dems: 68-25% in Coralville and 59-32% in North Liberty.Please don't tell Bob and Sue Dvorsky or Amy Nielsen I called Coralville and North Liberty `burbs.

Speaking of Nielsen, even holding a good legislative seat in a year this awful is an achievement. Any's 58-42 win over Royce Phillips closely mirror's Sally Stutsman's 60-40 win when this seat was open and new in the much better climate of 2012. Phillips generally did better the more rural the precinct, but also carried the Jeffersons (Airplane and Starship, better known as West and East or Shueyville and Swisher).

Donald Trump also won the Jeffersons and seven other precincts outside the urban part of the county, mainly from among the pure farm precincts but also including Oxford.

There really wasn't much more to see locally. We were bystanders in the battle for State Senate control. Bragging rights in the uncontested races go to Sheriff Lonny Pulkrabek over Auditor Travis Weipert and to Supervisor Lisa Green-Douglass (in her third win of the year) over Rod Sullivan and Kurt Friese. Sullivan, though, gets to keep bragging rights as the first voter in the election.

The county still casts 31.5% of its vote on straight tickets and Democrats had more than a 10,000 vote advantage on that alone - one of the reasons Republicans have such a hard time in general elections for local office, and one of the reasons the New GOP Trifecta may eliminate the option.

That early vs. Election Day split was as usual consistent across races. When the absentee numbers went up at 9:00 on Election Night, way back in another lifetime when there was hope, Hillary had a 76-19% lead, which slipped through the evening because of the smaller 53-37% Election Day total.

That wasn't as big a jump as my projection of 83,000 voters. And yet we were still rushing ballots out to polling places on Election Day. For the first time since early voting got serious in Iowa in 1992, the percentage of votes cast before Election Day edged down, from 58% in 2012 to 53%. The raw number of early votes slipped a little, too, while Election Day voting was up by about 4,000.

Some of that may be late decisions. Others, I heard second hand, were saying "I want to see the ballot go in the machine," as the shadow of a heavy ballot challenging effort in 2004 still looms long.

Within the early vote, there was a shift toward voting at the auditor's office, and away from satellite sites and mailed ballots. Some of this was strategy, as Democrats made their vote by mail efforts later after learning the hard way in past cycles that requests gathered at the door in June are garbage. (Wonder how those requests forms from Caucus Night performed. I don't know, I took the requests out of the Johnson County caucus packets.)

The Johnson County satellite schedule was less extensive this cycle. Though we got the IMU back for the first presidential election post-2008 flood, we lost two of the best performing dorms, Burge and Hillcrest Halls, to increased handicapped accessibility standards. And I'm still mad at Hy-Vee for turning us down. Lucky's was more hospitable, and had an AC/DC pinball machine in the voting area, but only drew 240 voters compared to the 400+ we used to get at 1st Avenue Hy-Vee.

Some of the shift was the voter's choice to come to the office rather than try parking downtown at the public library. We had a smooth operation and were regularly processing over 500 voters a day, peaking at 1800 the day before the election. More people voted at the office in 2016 than in 2008 and 2012 combined.

It may be a good thing that people got used to coming to the office. I expect satellite voting to be banned soon after the legislature convenes, and for the early voting window to get shorter. (Office voting and mail will survive, because Republicans like and use those methods.)  With no satellites and, say, two weeks of voting instead of six, 1800 voters in a day will feel like a picnic.

Still, better than no options at all. We're still working on the election day registrations, but through 6 PM at least 2653 voters had used that option. I'm at the point where I just want the session to get here and the hammer to fall so I'll know what the rules will be and can start adapting to the New Order.
Posted by John at 11/12/2016 10:48:00 AM