On the surface, Secretary Paul Pate's "Voter Integrity" bill is a deceptively mild voter ID bill. But when paired with other proposals, it would allow voters to use only a very narrow set of documents. One proposal sponsored by 10 House Republicans would end election day registration (EDR) in Iowa, and in the process limit the types of IDs that could be used under Pate's bill.

A draft of Pate's bill, which has still not been officially filed or released 26 days after his roll-out press conference (UPDATE: now posted), first surfaced early this morning at Bleeding Heartland, along with two other, less controversial bills from his office.

The core of the bill specified that the acceptable voter IDs are:
There are options for "attestors" like we have under the current EDR law, but those are limited and take more time - both for you AND the person behind you in line. For 2018 only there's a form to fill out if you don't have ID with you. Full effect would be 1/1/19. Worst case is a provisional ballot, but under federal law anybody can do that. Doesn't mean it counts. All this is before amendments and does not take into account other bills.

Reading further you see some language referencing another code section - that qualifier is very important - that appears to indicate that IDs that would be accepted under Iowa's current election day registration law would also be accepted. These include out-of-state driver's licenses or non-driver IDs, employer IDs, and school IDs - though there's a big catch: these IDs have to include expiration dates, which University of Iowa student IDs do NOT include. (Under current law, EDR voters also have to provide proof of address, usually with a lease or utility bill).

So there's a few more options, as long as the EDR law is in effect.

House File 150, with 10 House GOP sponsors, would repeal the EDR law passed in 2007 and in effect since 2008. From my perspective, this is worse than the ID law itself. In Johnson County in 2016, 5212 voters used this option on election day and in the eight early voting days after the pre-registration deadline.

These are voters who are already showing ID and providing proof of address. It's a popular law that works very well. Of these 5200 new voters, just a few dozen addresses had problems post-election, and those were postal problems, not fraud problems: either people who were right in the middle of a move or who left off their apartment numbers or post offices boxes. (Certain Iowa City mail routes in the densely populated student areas are very picky about apartments, and some of our small towns, especially Tiffin, are equally fussy about PO Boxes.)


We should have sent it Special D.


So there's no real "integrity" justification for repealing the EDR law. It's simply the hardball politics of making it harder to vote for highly mobile (i.e. young) demographics. The support I've heard so far is along the lines of: "well, people can just register on time, then." Trust me. I've worked in elections a LONG time, both before and after EDRs. No matter how much you promote a deadline, someone won't hear about it. And it's just normal for people new to the election process to get interested in it late. Turn away a 19 year old for missing the deadline, and they might not come back till they're 40. Or ever.

HF 150 is just the beginning of how Republicans are going to go at election law: with a Good Cop, Bad Cop strategy. Pate rolls out the "Integrity" bill, says he's not interested in other legislation, and gives himself deniability. Meanwhile the legislators amend it and offer other bills to chip away further at voting access.

For example. Senator Brad Zaun has a competing voter ID bill, Senate File 47, that would limit acceptable IDs to photo IDs only, not allowing the voter "acknowledgement" or "verification" cards under Pate's bill. It's very easy to see Pate's bill getting amended to Zaun's language.

Speaking of Pate's "verification" cards: It appears these would be issued once weekly by comparing the voter file to the driver's license file. (Not in the actual bill: Pate's office says there would be a one-time mailing upon implementation of the law to previously registered voters who don't have a license.) They'd be mailed out of the Secretary of State's office. That introduces some delay in getting them into the hands of voters. The devil here is in the details of how and when these cards would go out.

This provision is the contractual obligation album of the bill. Courts have ruled that if IDs are required there has to be a free ID, so Pate is dotting that t and crossing that i so he can say he did. This bill was no doubt thoroughly ALEC-vetted even before the election. ALEC gets over-used as a liberal boogey man, but this is what they actually do, draft legislation.

Elsewhere in the bill, as anticipated, the vote by mail window shrinks. There's a new first day to request ballots 120 days out (early July) which I have no problem with; virtually no self-starters request that early and I have long thought the coordinated campaigns solicit those requests too early. (Too many people move before Election Day.)

Moire of a problem, the last day to request a ballot moves back from the Friday before an election to the "pre-registration" deadline. (Or, if HF 150 passes, the registration deadline period.) That's 10 days before general elections and 11 days before any other election. (Military and overseas voters would be exempt from this under federal law.)

Last fall Johnson County saw 663 domestic vote by mail requests between Monday, October 31 (eight days out) and Friday, November 4, the current legal deadline. (Until 2004, there was no deadline at all. You could request a mailed ballot the day before the election, and I saw people successfully vote that way.) Of those 663 requests, 484 ballots were successfully returned on time and counted. That's people who at best would have had a lot harder time voting and for many that's people not able to vote at all.

There's other stuff here that is less interesting to me, frankly. A loan (NOT grant) program for the small counties who still don't have electronic pollbooks. There's a random auditing program and some paperwork requirements that look like they just document stuff we do anyway. I'm not AGAINST audits but they will probably not make the black box voting folks happy; I'm convinced their end game agenda is just hand counting all ballots all the time. 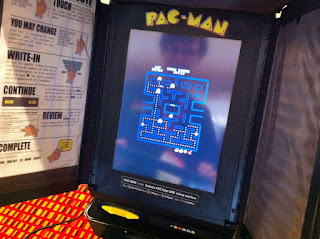 Audits will be paid for by charging a quarter to vote.


That might work in the UK if you're just voting on one thing, Member of Parliament, but it doesn't work in an electoral system like ours with dozens of items on the ballot. (Mercifully, the audits restrict themselves to president and governor.)

The two other bills do a couple interesting things. One would allow the use of multi-precinct "vote centers" in primary and general elections; at present this is only available in city and school elections. We use a vote center for North Liberty city elections and people seem to like it. The city sure does when it gets the bill, because it's much cheaper to open one big precinct than six small ones. (Workers are the single biggest cost in elections.)

The other bill clarifies the mess that some counties had last fall with school elections on a general election ballot and specifies that school board vacancies are filled at the next SCHOOL election. (However, there are other bills in both House and Senate, with similar language, that would combine school and city elections. A whole `nother post; that isn't as easy as it sounds.)

It also allows the public to petition for special elections in the event of a school board vacancy, which would be consistent with what is already allowed for city and county offices. We had an issue with this in Iowa City last summer. There was a strong consensus that the public wanted a special election, but the only way to make it happen was for the school board to go through the charade of "failing to appoint."

Another provision of the bill would expand the use of "nursing home teams" that currently visit licensed care facilities into assisted living facilities, specifically those focused on dementia issues. This is the only thing I've seen in any of these bills that would address voter...

Well, I won't call it "fraud." Actually canceling a registration for mental incompetence under court order is so rare that it hasn't happened in my county in at least 40 years. (We got paperwork once, and the person was not registered.)  But I've seen behavior that while legal make me uncomfortable.  When the 60something adult child is "helping" the 90something parent, it's hard to tell where the help ends and the pressure or the taking advantage of the situation begins. I'd rather have a bipartisan team of trained pollworkers dealing with it.


So let's count votes from these bills. Johnson County is down 484 late absentees and 5212 EDR votes so 5696... well more than George W. Bush's margin over John Kerry. And that's not counting people who forgot their wallet or whose roommate threw their card away (again, more likely a young mobile person) or who had to leave because the line was too long.

Which of course is the point.

Voter ID laws and earlier deadlines aren't about absolute prohibitions. They're about the percentages. It's a philosophical difference: is voting a duty or a right? Should it be easy to vote, or hard to vote? Iowa Republicans are coming down hard on one side of that.
Posted by John at 1/31/2017 07:18:00 PM