It's easy to read too much into a one precinct small town election for low stakes - just a seven month term on the Solon city council.

Yet Lauren Whitehead's strong (64-36%) win over the briefly appointed incumbent, Dale Snipes, is interesting and positive on multiple levels.

Solon has the traditional core of the small town it long was, with an outer layer of a fast growing exurb full of commuters. Northeast Johnson County, the piece that's in Republican Bobby Kaufmann's House district, was ancestrally Democratic but has been trending red in recent years. The city of Solon slipped from 60.6% Obama in 2012 to a less than majority win of 49.3% for Hillary Clinton last fall. When the third parties are factored in, it was an 17 point swing to the GOP - about normal for small town Iowa as a whole, but in counter-trending Johnson County, it was a weak spot.

So a Democratic win on challenging ground is good - and it's fair to call it a "Democratic win." Whitehead was very active in the Clinton campaign, both in the caucuses and in the fall, and her high profile party activism was a sharp contrast to Snipes, who had a typical small town city council non-"political" image.

Snipes had been elected to the council before in a low-profile race like that, the uncontested 2015 election, then resigned mid-term when his work schedule changed. When it changed back, and when another council member resigned, Snipes was appointed back.

Solon has had a series of resignations and appointments, for a wide variety of reasons - a mayor moving up to city manager, a council member moving outside the city limits, a couple others. Because the 2015 election was uncontested, the signature bar to force Tuesday's election was extremely low. Snipes' appointment would only have lasted five months, but with the bar low, folks decided that one more appointment was one too many. 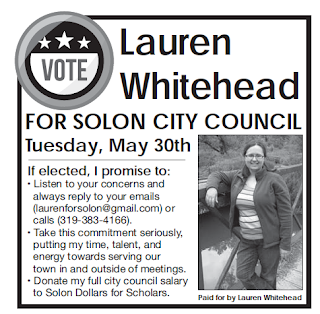 (The national mood is such that people want to vote on stuff - though a recent appointment following a double resignation from the Oxford city council is now past the petition deadline and there won't be a special election there.)

So the question Tuesday was whether the old ways would work again, or whether Solon was changing and a Campaign campaign would work - and the answer was resounding. Turnout wasn't a record, but the benchmark was artificially high because there was a large bond issue on the ballot in record year 2011. So 14.6% for an off-cycle date (the day after a holiday) for a seven month term is solid, and near the high range for a Solon election.

Also noteworthy: Over the last 25 years, there's been a pattern in Johnson County. When one side forces a special election with a petition, that side loses, the cost of the election becomes an issue, and the appointee wins. Whitehead's win marks only the second time that an appointee was defeated in the special election - the other was in chronically divided University Heights in January 2011.

Whitehead can't rest on the win, since filing for the full term in the fall is less than four months away. But she goes into that election as a strong winner.
Posted by John at 5/30/2017 09:52:00 PM