Thompson began to write extensively about how it was rumored that Muskie was addicted to a West African drug called Ibogaine, an upper of sorts that keeps a person awake in a very menacing fashion. Thompson speculated that this was probably the reason why Muskie had been acting so “erratic” of late. Unfortunately, he could not confirm it one way or the other because he had been banned from the campaign. Readers and other reporters took the allegation seriously and questions were put to the Muskie campaign. Denying the charge, Muskie expressed outrage. After the campaign ended, Thompson stated that he never accused Muskie of using Ibogaine. “I said it was a rumor to that effect,” Thompson explained. “I made up the rumor.”

I never said I was running for State Senate in District 37. All I said was that I was moving into the district, and that a big announcement was coming soon.

Both of those statements are cold hard objective facts, but a surprising number of people have jumped to the wrong conclusion. How could that have ever happened?

The fence of the former Smallest Farm in the Miller-Orchard neighborhood has been dug up and we closed on the house in Iowa City Precinct 9 on Tuesday. The move is in progress and if anyone wants to help haul boxes and furniture, Friday and Saturday are the big days. (If anyone wants a sublease, you can have a big yard with a close-in location.)

The big announcement in Senate 37, however, comes not from me but from my friend Zach Wahls. 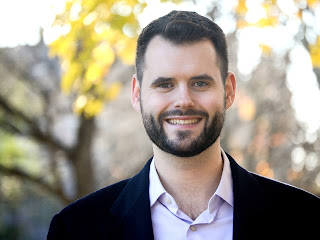 I first heard of Zach the way most of us did - through his iconic and viral "two moms" speech to  an Iowa legislative committee in 2011. One of my jobs as a now senior activist is to spot and help new young talent. Johnson County has had a poor track record of electing young people and I've long wanted to fix that. Too often we export our young talent - but Zach grew up local and has long been committed to building his life here.

And as soon as I got to know Zach as a person and not just a video, I knew we had a special talent here.  Zach isn't a show horse coasting on his moment of fame. He took that lightning-strikes opportunity and built from it.

Wahls' first big project was Scouts for Equality. Like so many Eagle Scouts Zach was frustrated by the Boy Scouts' anti-LGBT policies, which had been in place since since 1978 and successfully defended all the way to the Supreme Court. That meant change had to come from within, and Zach and the Scouts For Equality team led a three year effort to successfully persuade the Boy Scouts to voluntarily change the policy.

But Zach is not  a one issue person and in his campaign he plans to focus on health care, education, and workers rights. He has a depth of knowledge and interest in a broad range of issues, and the homework a candidate and legislator needs to do.

He's done the political hard work too, locally in the trenches and on the road helping other candidates  And he's an all-around great guy who hasn't let political celebrity get to his head.


I'll miss voting for Joe Bolkcom and Mary Mascher, and I regret not having one last chance to vote for Bob Dvorsky. (I lived in Coralville my first five years in Iowa, but moved before Dave Jacoby ran.) But my life transition has given me the opportunity to participate directly in this open race.