Goodbye To My Buddy 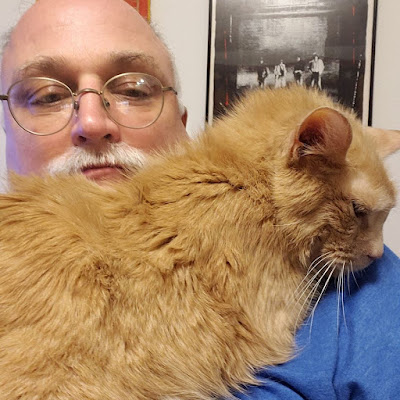 For the first time in 22 years, I do not have a cat. My buddy Dylan had 19 years of adventures, the last 15 of those with me.

Dylan was active and frisky until pretty recently - he gave us all a scare back on October 12 when I left the door open and he was outside for 12 hours (he was an indoor cat). After that I started spending extra time with him, grateful he had come home.

But he went downhill not long after that, and it had become clear that he wasn't going to be here much longer. Saturday night I stopped what I was doing and just sat with Dylan on my lap, watching the fireplace, with a sense that it was the last time.

I had a vet appointment scheduled for tomorrow but I knew it was just a matter of them telling me what fatal diagnosis it was and how much time was left.  But just last night he was being silly - I was afraid his face was bleeding until I smelled ketchup.

Last night he curled up and slept by my head. like he so often did - he had the head and his son Xavier used to keep my feet warm.

He had an accident and couldn't get to the box, which woke me up at 5 AM.  It wasn't the first time he didn't make it, and I patiently did laundry and worried.

I couldn't get back to sleep, so right before I went to work I gave him his second, or was it third, breakfast of the morning.

That's where Koni found him, curled up by the food dish. We don't know what happened and don't need to.