The Officially stated goal of the Republican Party's scheme to gerrymander Rod Sullivan or Janelle Rettig out of office by carving the county into five districts is "to increase rural representation."

As we all know from Bush-era budgets, the Republicans have trouble making numbers add up. So today we'll do some math. And I've brought along my favorite expert.

I'm here with redistricting consultant Jerry Mandering. Thanks for stopping by, Jerry.

Deeth, you know I hate this squeaky clean Iowa districting stuff, but you gotta work with the rules ya got.

So what are those rules?

Well, assuming the Republicans get the signatures and win the election, and those are two big ifs, we need to chop the county up into five equal parts. Did you get me those Census numbers?


Thanks. I forgot about that weird city surrounded by a city thing. They ever get that church zoning thing figured out?

Not yet. Another election this fall.

You're scary when you talk about a half a body.

I used to work in New Jersey and if you asked for a half a body, well, I knew a guy.

OK, so Iowa law says you can only chop a city into the smallest possible number of pieces. And Iowa City is your 800 pound gorilla, almost 53 percent of your population. Throw in that Unihoosity Heights thing and you get two districts all out of Iowa City and more than half of a third one. Even if you add a piece of rurals to each Iowa City seat, that's still an 86 percent city seat.

So that means Iowa City permanently controls three Board seats?

Bob Dvorsky told me to ask about Coralville.

That's 72% of a district. Kind of like Marion in Linn County, just the right size. Didn't you call that The District Draws Itself?

Yeah, I did. Can you take Coralville and put it with the rest of Iowa City, kind of like Dave Jacoby's House seat?

How about Coralville and PART of the rest of Iowa City.

You weren't listening. Iowa City has to be chopped into the smallest number of pieces, and that's three.

I got scared when you started talking about half a body.

Kid, if you can't chop things into pieces you don't belong in this business.

Yeah, yeah, yeah, go milk the pigs. Anyway, that was the problem Linn County had, see? Cedar Rapids had exactly the right number of bodies for three whole districts. The county wanted to make four, with each city district gettin' a slice of rural, like they had before. But the state said no. So they had to do three all in Cedar Rapids and the fourth one mostly Marion. 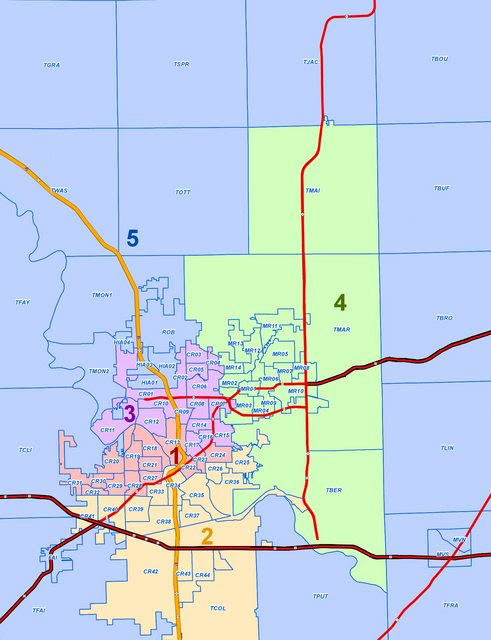 What about the fifth?

A work of art. Accidential genius. It's a big freakin' donut with one little bite out of it down by the airport.  I would be proud to call it my own work.

Great. Can't you make one like that for the Johnson County Republicans? I think that's what they want: an all rural district they can win.

They ain't gonna win it anyway but I'll humor youse for the sake of argument. You gotta deal with North Liberty yet. They're 51 percent of a district and they have to stay together. So you have to put some of your rurals with Coralville, some with North Liberty, and some with that leftover part of Iowa City.

Can you do Coralville and North Liberty together?

Nope. You got about 6000 excess bodies. Or as we call it in New Jersey, a landfill.

There's some brains under that beret after all.

The Republicans think this is their way to elect more rural supervisors.

Well, you still got a lot of room in how you chop up those rural pieces.

Not really. We have to do this the clean Iowa way.

Deeth, you are no fun at all. But I like ya anyway. Come out to Jersey sometime and I'll show youse how we do it.

OK, as long as we don't go near that landfill.