Voting rights are a critical civil rights issue in the post (?) - Trump era. Election law has increasingly become a partisan fight in the two decades since Bush v. Gore, and that trend has accelerated to unprecedented and dangerous levels in 2021, with Iowa unfortunately at the forefront.

Through all this, Democrats in general, and Iowa Democrats specifically, have positioned themselves as The Party Of Voting Rights. We want to encourage voting by mail and longer in person early voting and more drop boxes and satellite sites and more ID flexibility. We want to make voting easy, not hard.

Unless it's a Monday in February. Then Iowa Democrats say no, you have to show up in person, at one time and one place only, and attend a long meeting in order to vote. If you can't? Well, then, as one IDP chair said in the late 2000s decade, "you can always caucus next cycle." 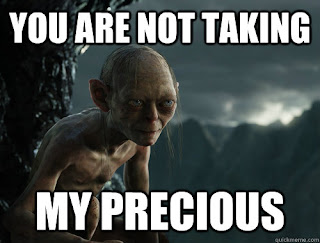 The reason for this hypocrisy, as I discussed in part one, is that Iowa's political leaders (of both parties) are afraid that any process that too closely resembles an "election" will trigger the New Hampshire Secretary of State, who would respond by moving his state's primary ahead of the caucuses and take First, Our Precious, away.

I was still a pretty enthusiastic Caucuses! and First! person through the Obama era, and I still fell into the group-think of not wanting to upset New Hampshire. As I look back, I was seeing the warning signs as long ago as 2004, when turnout took a Great Leap Forward and we started to over-fill rooms, which I'll discuss more later.

2016 was the deal breaker for me. We made yet another Great Leap Forward in crowd size, and after the caucuses we went through a long and nasty nomination fight with three levels of contentious conventions and the accompanying game-playing.

But I have to be honest, the real last straw for me was when disenfranchisement hit me close to home. My wife got hit with last minute mandatory overtime on February 1, 2016, and was not able to attend the caucuses.

I was aware of the issue before that, of course. A caucus process disenfranchises many classes of people, not just people who have to work that night. People with child or adult care issues - my wife also opted out of 2008 because our sons were young and didn't want to attend a long boring grownup meeting. (Child care at caucuses has generally been lip service rather than real.)

Other people who get left out include people with transportation issues. Either they have no wheels and the site is too far away, or they simply aren't comfortable driving at night. I tried to address geographic accessibility as best I could in 2020, but the bottom line was the main factor in site decisions was capacity. In some cases we had to take a farther out room that would hold (or almost hold) the crowd over a more geographically accessible but smaller space. We made efforts to line up free shuttle buses, but the effectiveness of that depends so much on people happening to hear about it.

Disabilities, of all sorts, are also an issue. Nothing is truly "accessible" when crowds grow over room capacity. It's not just physical disabilities. As someone on the autism spectrum, the noise and crowding and confusion and uncertainty of caucus night are challenging for me.

Snowbirds were also left out. It's a little harder for me to fret about people who can afford a winter and summer home, but I do want everyone to vote.

There's also the anonymity issue. While Iowa Republicans have a secret ballot at their caucuses, Democrats do not and the act of voting is a very public walk to a corner of the room - subject to intimidation by bosses or abusive partners or bullies from an opposing campaign.

The DNC was also well aware of these issues and passed a rules change for 2020: any state with a caucus was required to offer an absentee process.

Nevada had a very successful caucus early voting program with real absentee ballots in 2020. But under the current calendar, they're the third state in the nominating process, so they were not dealing with a New Hampshire Secretary of State looking for any excuse to move to an earlier date. Given our terminal fear of Losing First, Iowa needed another approach.

Iowa learned a few things about New Hampshire Secretary Of State For Life Bill Gardner in 2018 and 2019. The most relevant item here is that Gardner considers preparation of a ballot, printing of a ballot, and the process of qualifying for a ballot, to be key elements of an "election" as opposed to a caucus.

(My personal theory about that is that New Hampshire has a ritual of candidates filing for the primary in person at Gardner's office, and Gardner loves the publicity and cameras and does not want to share that with Iowa. Rest assured, no one in Iowa is interested in that.)

That's why the paper documentation of Iowa caucus votes in 2020 did not included any pre-printed names, and why it was called a "preference card" and never, Never, NEVER a "ballot." 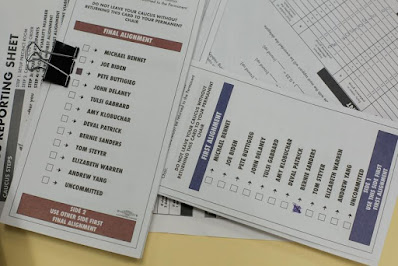 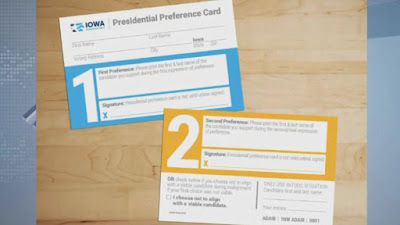 Nevada caucus ballot with printed names, Iowa "preference card" with no names
It's also assumed that Gardner considers holding a meeting to be a key component of a caucus, and that's why Iowa took the approach it took to the new, mandatory absentee process: a phone-in "Virtual Caucus." As designed, it was not a simple vote by phone process; it was more of a teleconference.

Virtual Caucus had its flaws, the biggest of which was that votes would almost certainly have counted for less than votes cast in person at a traditional caucus. Because of that, the presidential campaigns were not buying in. But with multiple dates and times offered, it was a definite improvement over not being able to vote at all.

The Iowa Democratic Party invested many months into Virtual Caucus, and was reassured all along the way by both the DNC and New Hampshire that it was a creative and acceptable idea...

...until early in the fall of 2019. At a public meeting, with no advance heads up to the IDP, DNC technical staff declared that Virtual Caucus was an unacceptable security risk, and the plug was pulled immediately. (Ironically, when COVID hit immediately after the 2020 caucuses, the whole world immediately adapted to virtual meetings, and every level of Democratic convention from the county to the national was held virtually.)

Since it was very late in the process, IDP had to come up with a quick Plan B.

I first heard of the concept of satellite caucuses in late 2007 from the late Art Small, a giant of local Democratic politics. He had moved to Iowa City's big Oaknoll senior complex and was concerned that he and his neighbors were reluctant and/or unable to venture out at night and travel the few blocks to the local elementary school holding that precinct's caucuses. He asked if we could simply have a separate caucus at Oaknoll, and phone the attendance numbers over to the school.

The 2008 rules didn't allow for that. But Nevada had satellite caucuses in 2008 to address a different problem, casino staff working the evening shift. There were some problems in execution, but Iowa cribbed the idea for 2016.

The 2016 satellite caucuses were more of a pilot program than a real option. There were only four in the state, and the only one that drew significant attendance was at Oaknoll. The idea was abandoned for 2020... until Virtual Caucus was killed. At that point, satellite caucuses were the only thing IDP had on the shelf, so they were quickly dusted off.

Satellite caucuses were just a drop in the total attendance bucket, at 2.4% of the grand total attendance. They may have helped a few people, and they had some impact on the results as the Sanders campaign was more successful at organizing and leveraging a few sites. Some of the sites were absurd, the most ludicrous being held for three people at private home in the Republic of Georgia. At least they got voted, but it really begs the question of why not just send them absentee ballots. Oh, right, because New Hampshire says we can't.

The other two big flaws were both related to the need for more advance planning than many people can manage. Attendees at most sites had to pre-register two weeks out. It's human nature, which I've experienced a lot in elections, that people don't plan ahead. A lot of people don't get work schedules that far out.

The bigger issue was that the petitioning window for satellite caucuses was narrow and obscure, just a few weeks in October and November. If you weren't insider enough to know in that short time frame that you needed to ask for a satellite caucus, you didn't get one.

I found this out the hard way. I was especially proud of lining up, at some expense, the Englert Theatre to host the Iowa City 20 caucus. The Englert is one of the gems of downtown Iowa City and was big enough to host my estimated crowd of up to 700 (we got 617). In the past we had held that precinct's caucus at the Public Library, which had burst at the seams and melted down in 2016, or at the Iowa City Senior Center.

The Senior Center is the regular polling place for the precinct, and is located very close to two large, lower income senior housing centers. The rest of the precinct is mostly students.

A couple weeks before the 2020 caucuses, I started getting unhappy calls from residents of the senior complexes, most of whom were Biden supporters, who very much did not want to go to the Englert. They could not walk there, and parking was non-existent. They wanted to caucus at the place they usually voted, the Senior Center.

The biggest room at the Senior Center has a capacity of a couple hundred, so it wasn't big enough to hold the crowd we expected for the whole precinct. But the Senior Center would have been a nice spot for a satellite caucus - had anyone asked.

The point is, no one knew to ask. The more connected and higher income seniors at Oaknoll knew how and when to ask for a satellite caucus, and they had a very nice one with 190 people in attendance. The guy in the Republic of Georgia was insider enough to know to ask, and his vote was counted. The Florida and Arizona snowbirds who could afford a winter residence knew to ask.

But the working class seniors at Ecumenical Towers did not know to ask until it was too late.

I blame myself in part for that - granted, I was very busy juggling the big picture of 57 regular precinct caucus sites, and IDP was managing the satellites - but I should have thought of it and had someone reach out and I didn't. I won't forget again. And when people called, I explained the crowd capacity issues, but no one went away happy and I suspect that a lot of those folks just didn't attend.

It's those crowd capacity issues, which I'll detail in the next installment, that are the biggest and hardest to solve problem with the caucuses.