Defenders of the caucuses have for decades argued that an in-person meeting is a great organizing opportunity for local parties.

Maybe it used to be, back in the living room days. However, as turnout has grown and and as the caucuses have expanded beyond the original core activist base into become a mass participation event, a de facto primary just with difficult voting rules, the organizing has gotten lost. An overwhelming majority of attendees leave the moment presidential preference is locked in, and many resent the time they've spent.

Nothing about the post-2000 caucuses is set up for the good caucus night experience of an average person who just wants to cast their vote. The kind of mega-caucuses we see in Johnson County do active damage to our organizing efforts.

Sometimes at work people don't know Who I Am, so I hear over and over again in the spring of leap years: "The caucuses were so crowded and disorganized! I'm never going to anything for the Johnson County Democrats again." Never "the Iowa Democratic Party." Never "the DNC." Always "the Johnson County Democrats." We locals don't make the rules that require in-person attendance with no absentee option, but we're the ones who get blamed.

We don't lose Democratic votes over it in the fall, and eventually they caucus again, only because they have no choice. But we lose people. People who might be donors or volunteers instead sit on the sidelines because they are convinced the local Democrats are a shit show - because their first experience when they try to join is getting told "go stand in the corner for three hours to vote."

The rules and process that still work sorta OK for small rural counties (for people who are able to attend, that is) are hopelessly broken in cities and on campus.

This is the biggest 2020 caucus in the state: 860 people in Iowa City Precinct 17. You don't see an entire upper auditorium level in the photo. There were 72 whole counties that had fewer people attend their caucuses. 860 people isn't a caucus - it's a state convention.

However, turnout has continued to grow in the biggest counties and precincts. As far back as 2004 in Johnson County, we started to exceed the capacity of the rooms, and it's only gotten worse even as we rent bigger spaces. Johnson County turnout was artificially low in the state record 2008 cycle, because the January 3 date excluded most University of Iowa students, who were away on winter break. We set a new local record in 2016 and again in 2020, even as state turnout declined.

The 2016 and 2020 Johnson County numbers do not include satellite caucuses.

Show your work, you said? OK, let's get into numbers.

When we learn statistics we learn basics of mode (most commonly occurring total), median (the number in the middle of the set), and mean (add them all up, divide by number of items).

(I'm setting aside the satellite caucuses for now to make this easier and just looking at the 1678 precinct caucuses.)

The mode - the most common precinct caucus attendance total - was just 15, which tells us little except that there are a lot of small rural precincts. The halfway point, the median, tells us pretty much the same thing. Half the caucuses had 61 or more people, half had 60 or less.

60 is on the high end of the traditional, "living room" size caucuses. It's the size group a caucus is designed for. But that smaller half of caucus sites only accounted for 14% of total attendance.

The statistical mean caucus attendance, what most would call the "average," was just under 103 people. Not a living room, but maybe a comfortable grade school gym.

But 71.8% of caucus goers had something bigger yet. 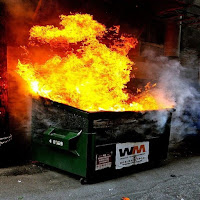 (We don't like to talk about the Fire Marshal. We think they have a don't ask don't tell policy on Johnson County caucuses. If I weren't a team player I would have called them myself on some of our precincts. We did get a threat in 2004 from the University that they were going to have the fire marshal shut down a caucus at the Iowa Memorial Union, but we fast-talked our way out of it.)

Even if you're lucky and the room size is still comfortable, the sign-in line is longer, and thus the event starts later and takes longer. Big rooms often have bad acoustics, that often aren't helped by amplified sound, so people have trouble hearing and understanding directions. The parking is harder and farther away. More people means more new people, and more new people means more people who don't know that this is not a show up, vote, and leave thing (presidential campaigns, in their own self interest, tend to set the expectations a little too easy). All these things put people in a grouchier mood.

A quarter of all caucus goers were at just 88 precincts, with 339 or more attendance.

It's a training and public education question, with contradictory needs. The average caucus chair is dealing with crowds in the range of 60 to 100 or smaller. But the average caucus attendee is at a site with 200 or more. If we train merely for what the average chair needs, we're not preparing the chairs, or the caucus goers, for what most attendees will experience.

Now let's break out those 33 caucuses with 500+ attendance by county.

Johnson County had 34 caucuses (out of 57) with more than 300 in attendance, and 42 that were larger than the 191 attendance that the average caucus attendee experienced.

Yet despite our dominance of the highest attendance, caucus overcrowding is not "just a Johnson County problem," which I've heard countless times over the years, and which does nothing to actually solve the problem.

Seventeen counties had at least one caucus over that 191 attendance midpoint of what a typical caucus goer experienced, and even that size of a caucus is far, far bigger than this process was ever meant to be. Yet the Iowa Democratic Party insists on playing up the idyllic, median, 60 or less living room town meeting stereotype.

Of course they do. Because deep in their hearts, despite the desire for First, they know that this is not a way to vote. 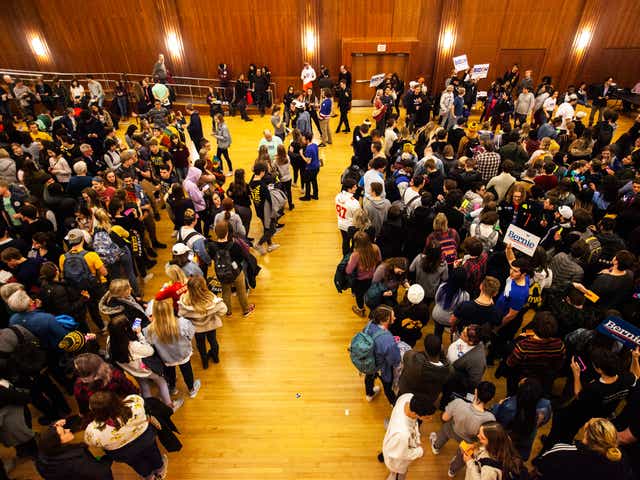 This is the caucus I attended in Iowa City precinct 5 (mostly dorms). It was tied for 6th biggest at 754, and was the 4th hardest in the state to get a delegate (207 attendees per state delegate equivalent). Most of these attendees were first time caucus goers, and most were frustrated by the long waits - it was 7:45 before sign in was finished, since nearly everyone had to register to vote or update their address. It took at least another two hours to sort and count and complete alignment.

There's nothing more we big counties can do within the existing rules to make this better. We can't just "get a bigger room." We have already gotten the biggest rooms that exist, without any financial help from the state party that forces this task onto us, and they are still not big enough. And even if the room is big enough, the process itself falls apart into a cluster of crowd control and anger management. Maybe we are failing - but we are being set up to fail, because the task we've been assigned is impossible.

The reputation of our worst caucuses precedes us. I'm one of the few people bilingual in both Election and Caucus, and I have seen this scenario many times:

An elderly voter from the east side of Iowa City. She is a loyal Democrat who has voted in every election since Adlai Stevenson. She knows what to expect. She went to the 700 person caucus four years ago and knows this one will be even worse. She just can't anymore. She cares just as much but she can't stand for three hours. She can't walk six blocks from the nearest available parking space. She is standing at the auditor's counter near tears, not knowing I am Caucus Guy, begging: "can't you please send me an absentee ballot?"

And I have to stay in character and say "Sorry ma'am, but the parties run the caucuses, not our office. They make the rules and they require in-person attendance. You need to talk to the party." (Sometimes I just have to break character and let them know I am Caucus Guy and that I know the situation is just plain morally wrong.)

She is more important than your collection of candidate selfies, or your county fundraiser, or your byline.

She is more important than First.

When the biggest room in or near the precinct is no longer big enough to hold the people who want to attend, the only solution is getting people out of the rooms. We need absentee ballots - real ones, with pre-printed candidate names, that you can vote at home in secret, no matter what the New Hampshire Secretary of State thinks.

And, importantly, these absentees need to count equally to ballots cast in person. Even before the plug was pulled, Virtual Caucus was fizzling. The presidential campaigns were not buying in and were actively discouraging participation because "it counts less." I didn't blame them - their job was to win, not to solve my space crunch. Instead I blamed the proposed rules, and fought in vain to change them.

In the summer of 2019, when we were arguing about whether votes at Virtual Caucus should have equal weight to in person votes, rural advocates argued: "If we count Virtual votes equally, then all of my people will vote that way, no one will show up at the 'real' caucus, and I won't be able to organize my central committee." If our only model for rural organizing is a mandatory meeting, then we've got worse problems than I feared

The state party and the rural counties have deliberately closed their eyes to the overcrowding crisis that's happening in the cities and on the campuses - and when we complain, they say that we aren't showing enough "respect" and that we "don't care" about rural counties. "You have it easy over there in deep blue Johnson County. Try being out here where our people are scared to put up yard signs because the neighbors will use them for target practice."

Hey, I understand. It's been a long time, but I ran for the legislature in a rural district once. I know that we can't win if we don't win together and if we don't turn around our rural problem. I know that our legislators in our safe blue seats can't do a damn thing without a majority.

We want to help. Johnson County is working harder at raising money to export across the state, and to send volunteer crews out to neighboring purple and red areas. We've increased our winning margins to 71% for Joe Biden, 15 points more than any other county in the state, just by opening the polls and getting out of the way as the voters stampede in. We aren't looking for trophies.

But we can do better. Could we get to 75% for the top of the ticket if we didn't alienate hundreds or thousands of potential volunteers and donors because they had to endure a 500 body caucus?

The caucuses, as they exist in Johnson County especially but also in other urban and campus areas, are hurting us. On this item, we're the ones who need help from the rest of the state. We just can't function with rules and processes that were made for a different time and place. You need to let us do things our way, and maybe you need to adapt a little bit to allow us to do that.

Tomorrow, we'll see another way that the rules are punishing the best Democratic counties.