Iowa Democratic caucuses defenders, which I used to be, will argue that the caucuses are a representative democracy, much like the House of Representatives, where representation is allocated, rather than a direct democracy.

This means candidates can't run up the score with big wins in big counties, and it mutes the impact of isolated turnout waves.  No matter how many people show up, the same number of delegates are at stake. That means a caucus vote varies in its impact depending on where you live. Because turnout varies a lot, not every caucus vote carries equal weight.

This is a rewrite of a post I write every cycle:

This data probably hurts my efforts to move away from the caucuses. No one wants to Disrespect The Rurals, and I can already hear them screaming "if we go to one person one vote, no one will campaign anywhere but the big cities." But fair is fair. If Democrats are going to complain about the malapportionment of the US Senate, where small rural states have disproportionate power, we need to look in the mirror as well and implement fairness closer to home.

Some counties, like mine, are full of go-to-meeting activists who are more likely to attend a caucus. Others have more people who may just vote, sometimes even for Democrats, but are otherwise less active. In general, per capita turnout is lowest in rural areas and highest in cities, especially cities with college campuses.

You may not call that a problem - indeed, some caucus old timers will tell you that the formula, which is locked into the Iowa Democratic Party's constitution, was specifically designed to under-count the student vote in Iowa City, Ames, and other college towns.

Obviously, from my perspective here in Johnson County, that's a problem. In fact, the obscure allocation formula likely skewed the national interpretation of the outcome in both 2016 and 2020.

In 2020, for the first time, IDP released the raw vote count from the caucuses - not because we wanted to, but because the DNC forced the issue. Yet we insisted on declaring Pete Buttigeig the "winner" (once we finally figured things out) based on the same tired "state delegate equivalent" (SDE) metric we always used.

SDEs are an inherently artificial measure, because it breaks delegates into decimal fractions at the precinct and county level in a way that doesn't reflect the reality of the county, district, and state conventions, where delegates are whole bodies.

(If you really need 0.375 of a delegate, I know a guy - but it's gonna be a while before you eat anything from Satriale's.)

I can't stand Bernie Sanders, and I think he should never have been allowed to run in the Democratic nomination process without formally joining the Democratic Party. But dammit, he got the most votes, and I consider him the 2020 caucus winner.

Sanders almost certainly got the most raw votes in Iowa in 2016 as well, but those totals weren't officially released (though we know the numbers exist in some IDP memory hole, because precincts were required to report alignment totals on caucus night 2016). In both 2016 and 2020, Sanders (and to a lesser extent Elizabeth Warren in 2020) did well in the college towns - which, as you'll see, had a higher share of the turnout than they did of the delegates. A vote in high turnout Johnson County mattered less than the vote of an Iowan in a low turnout rural county.

But exactly how much less?

An analysis of 2020 caucus attendance shows that, on average statewide, it took 81.67 people attending a caucus to elect a state delegate equivalent. But that varied dramatically by county, and by precinct within counties.

(For this analysis I'm leaving aside the satellite caucuses, which accounted for just 2.4% of the grand total attendance. Though it's worth noting that the two biggest satellites, at the UI campus and the Oaknoll senior complex, were both in Johnson County.)

The easiest place to elect a delegate was Osceola County, where it took just 23.33 attendees to elect a state delegate equivalent. Two other counties, Taylor and Adams were at or below 40 people per SDE, less than half the statewide average. The bottom ten is filled with small, rural, population losing, Republican counties.

And as always, the same places stood out as the most difficult places to elect a delegate: campus communities most of all, urban areas, and high growth suburbs. 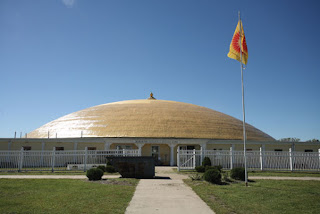 Jefferson County, with its very active meditator community and Maharishi International University, was at the very top at 147.42 attendees per SDE. The People's Republic Of Johnson County was a close second at 131.22. Poweshiek County was third - and that statistic was almost entirely driven by the 830 people who attended the caucus for the Grinnell College precinct.

Ten counties were above the statewide average of 81.67 bodies per SDE - these counties accounted for half of the total attendance. They include all the usual suspects - the campus counties and the largest counties. The top ten also includes, again, Sioux County, the most Republican in the state. My theory there is that being a Democrat in a place like that, like being a Republican in Johnson County, is a statement, and the few-but-proud Democrats are activist types who show up.

And three of the top ten were high growth suburban Dallas, Madison, and Warren counties. High growth makes it harder to elect a delegate from your county. A voter who moved to Dallas County three years ago won't count in the county's presidential vote totals used to calculate delegates, because they voted somewhere else.  A voter who moved in after the gubernatorial election wouldn't count at all toward the delegate count.

The flip side is, people in shrinking rural counties who moved away or passed away still contribute to the county's delegate allocation, meaning it takes fewer LIVE bodies to win delegates.

The gap is less than it's been in past years, in part because Democrats did so poorly in the rural counties in 2018 and 2020 that those places lost delegates, and because Johnson County did so much better for Clinton and Hubbell than anyplace else that we were rewarded with more delegates. Still, it took six times more people to elect a delegate out of Poweshiek than out of Osceola, and that's not defensible.

If you want to drill really deep, to the precinct level, the easiest place to earn a delegate was Sherman Township in rural Story County, where it took just 9.6 people to earn an SDE. In Ames Precinct 4-4, it took 176 people. That's an 18 to 1 difference within the same county.

The single hardest precinct in the state to get a delegate was that Grinnell campus precinct, where it took 247 people to earn an SDE. The caucus I attended in Iowa City Precinct 5, also a campus precinct, was fourth hardest, at 205 attendees per SDE.

I'd like to see someone take on the delegate allocation formula at the state convention next year. If we're going to keep having a caucus, which I don't think we should, we could at least get closer to one person one vote. If the rural counties don't like it, they can do what my county does and show up.